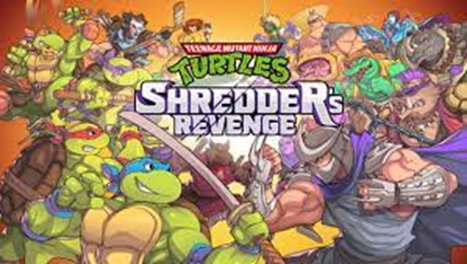 COWABUNGA! The turtles are back in the arcade-style beat-um-up “Teenage Mutant Ninja Turtles: Shredder’s Revenge.” The game takes place during the 80s era of the Ninja Turtles and bridges the gap between old fans and new. The cast enlists of Cam Clarke, Rob Paulson, Townsend Coleman and Barry Gordon reprising their roles from the 80s TV series, and they bring magic to their shell-tastic performances just like the old days.

“TMNT: Shredder’s Revenge” is just like the old 90s arcade classic “Turtles in Time.” It’s packed with villains and has a lot of replay value. Set in Manhattan, New York, each of the game’s sixteen levels is packed with enemies and formidable bosses. You can choose to play as any one of the four ninja turtles, their rodential sensei Splinter, veteran reporter April O’Neil, or hockey-stick-wielding vigilante Casey Jones. Play online with friends or be matched up with strangers online as and have a shell of a time.

The game’s soundtrack is incredible, with Wu-Tang Clan members Ghostface Killah and Raekwon performing “We ain’t came to lose” (Shredder’s Theme) which serves as the main Ninja Turtles theme song.

“Teenage Mutant Ninja Turtles: Shredder’s Revenge” is recommended for any Turtles fan! The game is available on Nintendo Switch, Playstation 4, Xbox One X/S, Windows and Steam.

Pros: The game is action-packed. Every level is fun and exciting.

Cons: Switching characters while playing the game can be a little tedious from going back to the main menu.