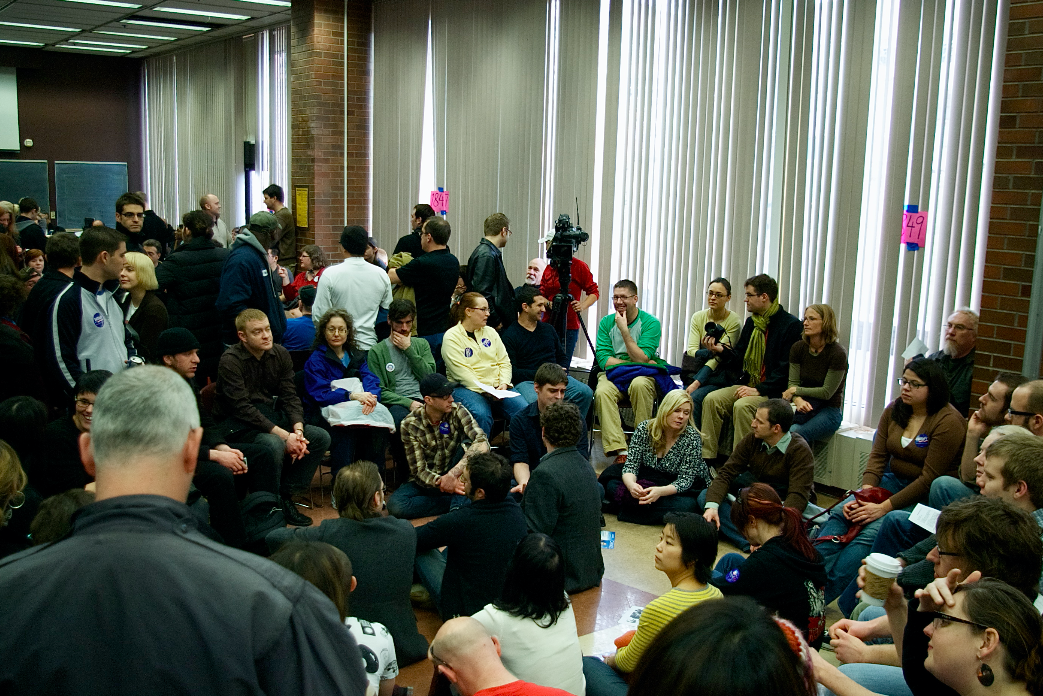 When we select a candidate from the slate of presidential hopefuls this year (a big decision for DFLers; not so much for Republicans), we won’t have to mill around cramped elementary school classrooms or church basements for hours on end. Why? Selecting a presidential candidate via caucusing has come to an end in Minnesota.

After long lines and disorganized procedures frustrated many first-time caucus attendees during the 2016 election year, the state legislature passed a law installing presidential primary voting with a large bipartisan majority. For many Minnesotans, it’s about time.

As the app-debacle in Iowa recently demonstrated, caucusing can carry major complications.

Plus, there’s a lot to like about a primary system—no need to figure out which room in the school or church your precinct is meeting in; just show up to your assigned polling station and vote. No need to wade through an ocean of eager volunteers in bright t-shirts passing out last-minute flyers and stickers. Most importantly, everyone can participate in this vital civic responsibility now. If you wanted to, you could vote absentee in the primary today with very little effort or fuss. All of these things constitute a net advantage.

And yet, I’m a little sad to see the era of presidential caucusing come to an end. It marked a regular opportunity to gather with neighbors—the people who live down the street that you maybe don’t talk to often—to discuss issues that matter.

Yes, it was always a little awkward—trying to put names to vaguely familiar faces, turning around in a desk designed for a 10-year-old to speak to someone, forgetting to print out the right forms ahead of time. And it was a long process, usually at least two hours, and it took even longer in 2016.

If all you want to do is select a presidential nominee, the rest probably seems superfluous. But I still enjoyed it. For me, caucusing was bottom-up democracy in all its messy, chaotic, emergent glory. In case you’ve never attended before, here’s an overview of what I remember (the steps may have happened in a slightly different order—it’s been a couple of years):

Step one: Determine your ward, precinct and caucusing location. Although there were always people available to help you find your precinct information at the caucusing site, knowing ahead of time streamlined the process. And it’s frustrating to stand in a long line at one caucus location only to find out that you actually need to be across town.

Step two: Gather with other caucus-goers in your precinct. Sign in at the front table. Sometimes, this would only be a group of one or two dozen neighbors, but in 2016, there was a lot more participation. Many rooms were filled beyond capacity.

Step three: Nominate and elect precinct chairs, vice chairs, etc. In some precincts, this is a very orderly process with multiple people vying to fill these positions. There may be speeches and a few rounds of voting. In other precincts, it may be more like a game of hot potato—whoever reluctantly volunteers gets seated.

Step four: Affirm the party platform. This gathering is about supporting your state political party after all. You should know what the party cares about.

Step five: Discuss (and, previously, vote on) candidates, including the presidential nominee. Some candidates for state offices or party leaders would drop by during this time. It was a good opportunity to meet the people who represent you at the state level. Some caucus-goers may have prepared speeches to help sway undecided attendees to support their preferred candidate(s). In 2016, this was a prolonged process, because there was no clear presidential front-runner for either party. Ideally, this voting would correspond with the sixth step.

Step six: Nominate and elect delegates to the district organizing convention. The delegates used to reflect the voting outcome of the precinct. For example, if your DFL precinct was eligible to send seven delegates—and 40% of the precinct voted for Klobuchar, and roughly 30% each voted for Warren and Sanders—then three delegates should be Klobuchar supporters and two each for Warren and Sanders. Ultimately, it was the delegates who attended the state party convention who got to determine who the party supported at the national convention.

Since Minnesota has switched to a primary system, however, things are different. Whoever is elected to be a convention delegate is bound to abide by the state’s primary outcome. So, if a Sanders supporter wants to be a delegate, for example, that person would have to nominate Warren if she wins the primary, regardless of the delegate’s personal convictions.

Step seven: Submit resolutions to be added to the state platform or action agenda. Caucus-goers can fill out a resolution form, then present it to their precinct. The caucus-goers would then vote on whether or not to pass it on to the district convention. There is some formal language that should be roughly adhered to for these resolutions—but, ultimately, they represent grassroots activism.

Of the entire process, I liked hearing (and occasionally submitting) resolutions most of all. This was a chance to hear what people in your area really cared about—social justice, education, health care; specific issues that usually impacted the resolution-presenters personally. Sometimes, people would bring premade resolutions drafted by nonprofits or activist coalitions, but for me, the ones that were authored by attendees were always the most interesting (or, on occasion, entertaining).

Step eight: Wrap up and adjourn.

So, that was how it worked. And even though you can still attend your party’s caucus this year, it’s not going to be the same. Without the excitement behind nominating a presidential candidate (for the DFL at least), I’m afraid only those already enmeshed in party politics will attend. Everyone else will simply vote. While that is important, there is something about the community engagement inherent to caucusing that will be lost. So, please—don’t forget to vote in the primary. But as you do so, take a moment to remember the participatory legacy left by Minnesota’s caucus system.

Want more information about how to vote in the presidential primary or participate in your party’s caucus? Visit the Secretary of State and state party websites (DFL, Republican).

The struggle and stigma of mental illness