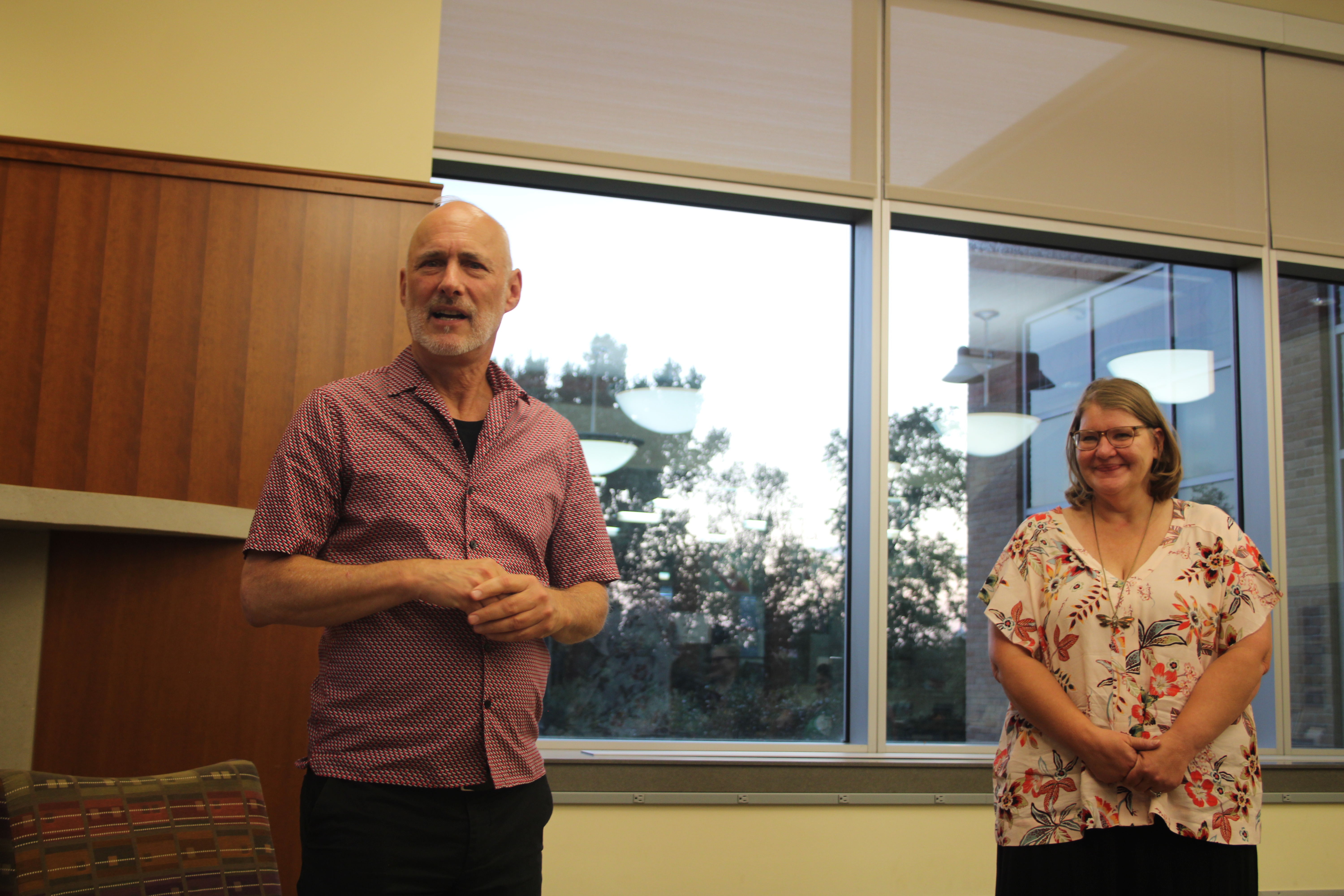 Alan Lessik (left) and Alumni Relations Director Kristine Hansen stand together in the first floor lounge of the Library and Learning Center prior to a reading from Lessik’s debut novel, “The Troubleseeker.” Lessik also read an excerpt from his upcoming novel, “The Kenzo Koan.” Metropolitan State University’s Alumni Association hosted the Sept. 5 literary event. (Brandon General / The Metropolitan)

Alan Lessik, a Metro State alumnus, recently returned to campus to discuss “The Troubleseeker,” his first novel published in 2016 by Chelsea Station Editions.

Lessik resided in the Twin Cities between 1973-1988, and he has an extensive background in activism and non-profit work. Housing, HIV/AIDS and social justice are just a few of the causes he advocates.

Lessik describes his writing as “gay global novels,” in which the characters are often searching for home in a variety of different ways.

To illustrate the motivation for his writing, Lessik quoted a song from Lin-Manuel Miranda’s “Hamilton,” in which Eliza Hamilton asks, “Who lives, who dies, and who tells your story?”

Lessik said he believes this is especially important in the queer community where so many stories haven’t been told.

Gay male literature, according to Lessik, is mostly about white, middle-class men. Although Lessik identifies with these demographics, “that’s not my interest. I’ve read those stories. No one needs another coming out story of that ilk.”

“The Troubleseeker,” Lessik’s first novel is a retelling of The Odyssey and was inspired by the immigration story of his ex-partner, René Valdes’. This novel chronicles Antinio as he journeys from Cuba to the United States in search of social acceptance regarding his sexual orientation. The unique incorporation of Cuban SanterÍa and Greek mythology results in a riveting and intricate plot which demonstrates the wide scope of gay literature.

Lessik is working to publish his second novel titled “The Kenzo Koan.” Kenzo is a gay father writing to his daughter with whom he has never had a relationship.

“[Kenzo] is being very open. And in my story he’s a same-sex loving person without shame,” elaborated Lessik.

Lessik started writing fiction relatively late in life, in large part due to his discomfort with using outlines. Describing the process of using outlines as “painful,” Lessik said he’s not a logical person, so relying on outlines while writing hampers his creativity rather than enriching it.

Instead, Lessik allows the story to flow from his consciousness. In reference to his completed novels, he said, “I had an idea and started one day. I just declare ‘I’m going to start writing,’ and the story just pours out of me.”