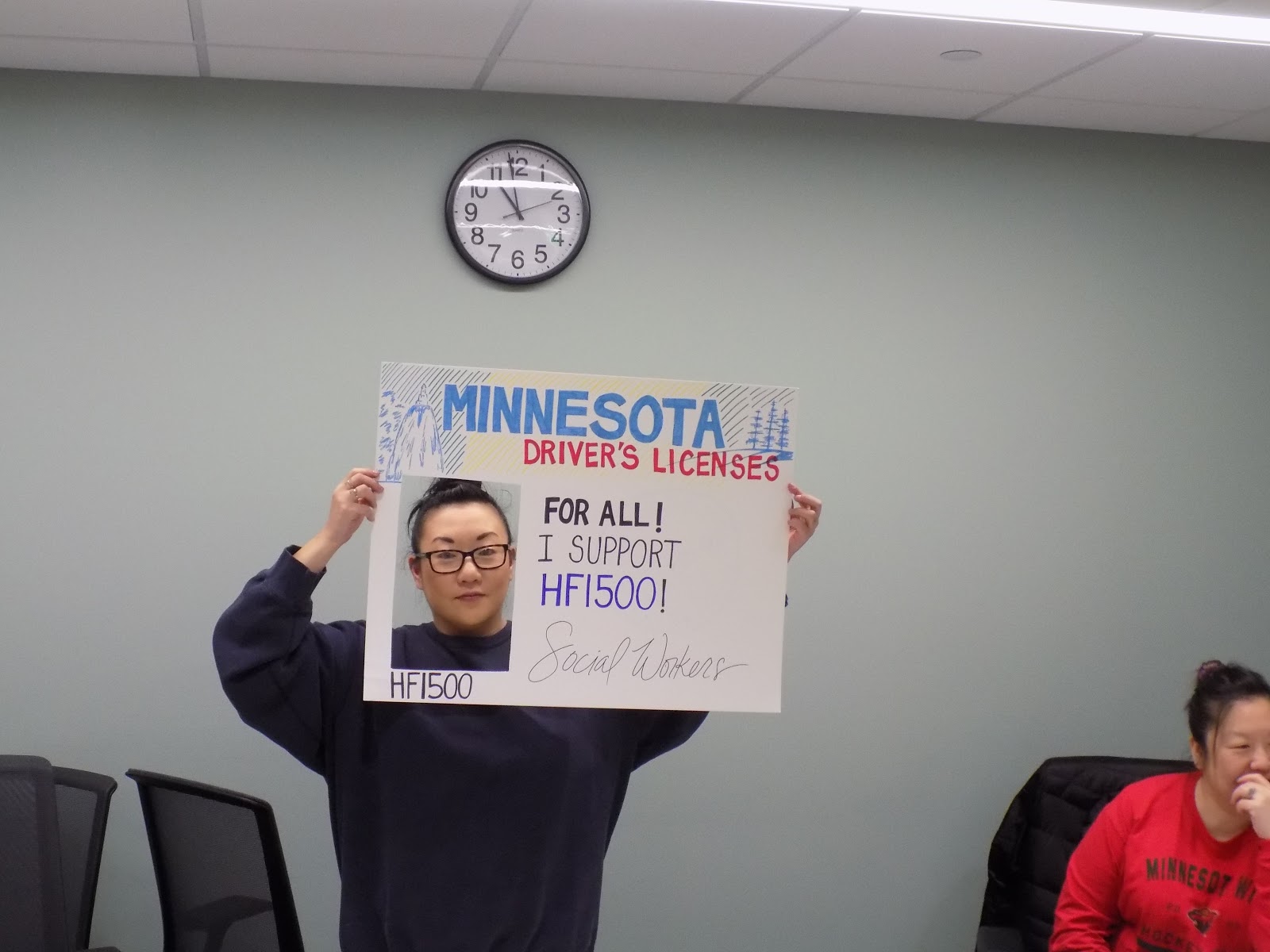 Metro State student Rachel Sell displays her poster supporting HF 1500, the driver’s license for all bill at a Social Work Student Association meeting on March 30, 2019. She planned to carry it to Social Work Day at the Minnesota State Capitol on April 8. Photo by Scott Lindell / The Metropolitan

Every poster board was plain, white and measured 22 by 28 inches. But as Metro State social work students selected markers and messages, each poster transformed into something more.

They became signs of change.

When the Social Work Student Association (SWSA) met to make posters that Saturday morning, March 30, they only had a week to wait for Social Work Day at the Capitol. Then they would rally with over one thousand fellow social workers and meet with legislators.

The march on April 8 was organized by the Minnesota chapter of the National Association of Social Workers. Participants could learn about issues affecting the social work profession and clients, and then meet with elected officials to advocate for pending legislation.

The SWSA members knew their posters needed to make an impact as they marched from Union depot in downtown St. Paul to the steps of the Minnesota State Capitol.

Nicole Freeman, president of the SWSA, encouraged everyone to target their poster’s message and select a bill that affects them personally.

One student chose HF 1500, a proposal “dear to her heart.” Rachel Sell supports the bill that would extend driver’s license eligibility to undocumented immigrants who are Minnesota residents.

Also known as the driver’s licenses for all bill, HF 1500 passed the Minnesota House on April 5. It’s now being considered in the Minnesota State Senate, where the proposal has less support.

Sell’s support for the cause came from her time working at Waite House, a community center in south Minneapolis. It was there she met Jovita Morales, a longtime advocate for driver’s license reform.

“The premise of it is the safety,” said Sell. “This [bill] will provide an extra safety measure for everyone on the road.”

She knows people who would benefit from having a driver’s license as they struggle to commute to jobs and transport their families.

“One step in the direction in making them feel like they are part of the community,” she said of the bill.

At another table, SWSA treasurer Amy Gaffin proudly held up her poster with the message, “Social Workers Care About Children’s Mental Health.”

Gaffin wanted to go to Social Work Day to advocate for more funds for teacher training. Better training, she believes, could help schools recognize and help children with mental health crises, rather than labeling them as behavioral issues.

“[It’s] important because children who do not perform optimally in school fall behind,” she said.

And, unless they’re diagnosed, they go without treatment and fall further behind.

During the meeting, SWSA vice president Alex Wieber gave guidelines for talking to legislators. She emphasized how preparation would increase students’ confidence and help them make a good impression. Researching issues, preparing an elevator speech, and writing up a fact sheet were all on her tip sheet.

Wieber’s most important advice to students meeting with elected officials for the first time?

“Sharing a personal story is the No. 1 reason they will change their mind,” she said.

By attending an advocacy session at a conference of the Minnesota Social Service Association, Wieber learned how stories and photographs helped influence legislators to lower the blood-alcohol limit for driving.

And she added: always follow up with a thank you note.

“Don’t burn that bridge,” she said. “Go further in your advocacy.”

For more information on SWSA, see orgsync.com/45858/chapter or email metroswsa at gmail.com.