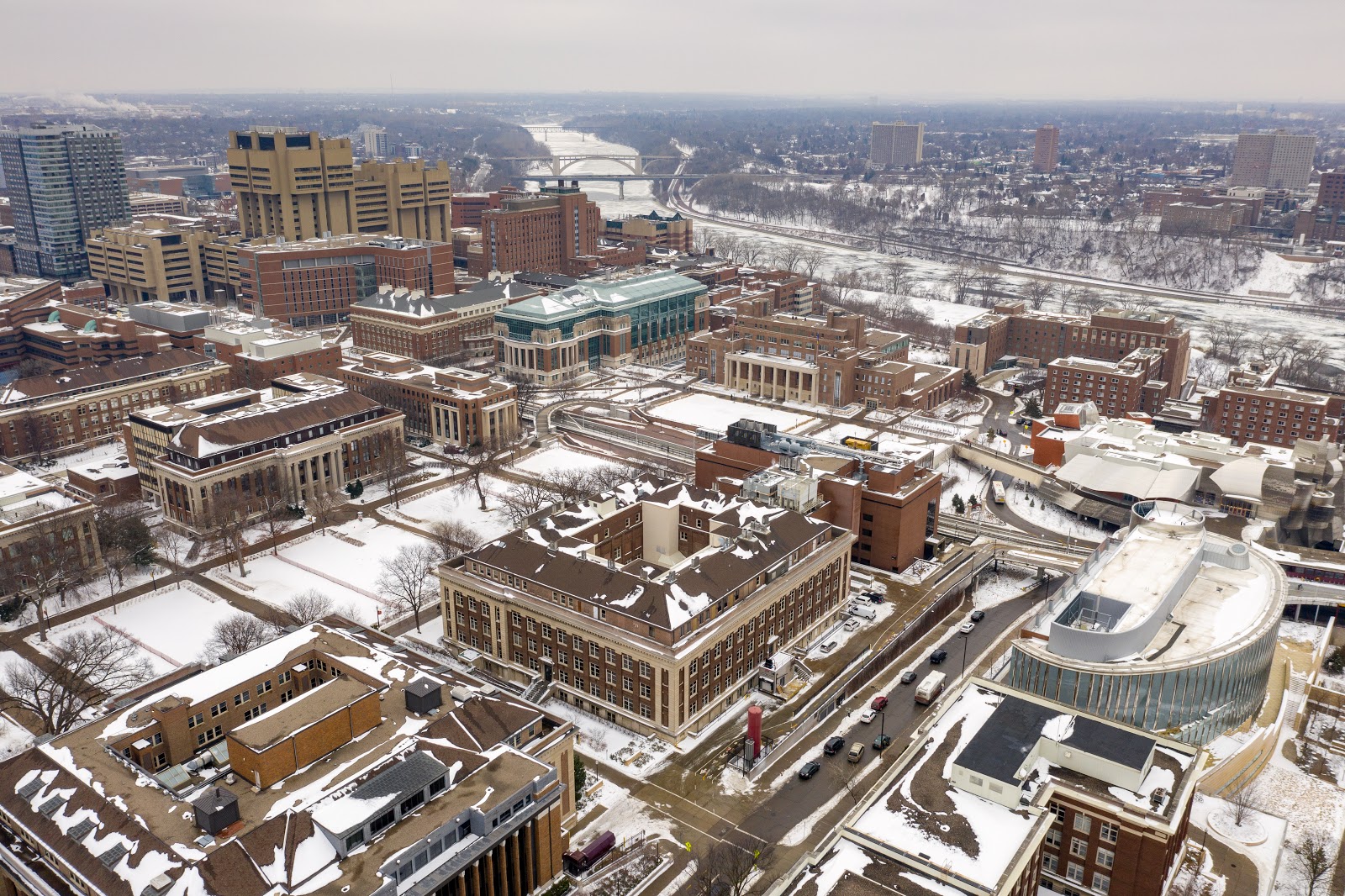 The East Bank of the University of Minnesota campus in Minneapolis on Feb. 2, 2019. Coffman Memorial Union is the columned building just upper-right of center. Photo by Mitchell Hirsch / Flickr Creative Commons

In February, a 125-page report from a University of Minnesota task force recommended renaming four buildings on campus, including the Coffman Memorial Union.

In fall 2017, an exhibit at the Elmer Andersen Library, entitled “A Campus Divided,” explored the university’s history of discriminatory leaders and policies. The exhibit spurred a petition and a resolution from the student government to rename some of the buildings on campus.

That student action, in turn, led to the creation of “The Task Force on Building Names and Institutional History.” On Feb. 20, they released their recommendation that four building names should be changed: Coffman, Coffey, Middlebrook and Nicholson.

Why? Coffman was a supporter of eugenics. Coffey believed in segregation. Middlebrook refused to end racist university practices, even after they were flagged by African American students and the NAACP. And Nicholson profiled Jewish students and organizations, spying on them and recording their activities both on and off campus.

Although such actions and beliefs are abhorrent, it is not particularly surprising that these skeletons were uncovered. Th U of M is hardly the first higher ed institution to reckon with the names displayed on its bricks and ivy.

Following the call in 2016 to take down Confederate monuments, universities have been under pressure to look at who they’ve dedicated “monuments” to. Brown, Yale, the University of Pittsburgh and University of Maryland have all faced this issue.

Yet the University of Minnesota has been more reluctant than its peers to move forward with the name changes. The taskforce spent well over a year deliberating this issue, and the process is still not resolved.

President Eric Kaler has voiced support for renaming. However, the Board of Regents has to sign off on the proposal and has expressed concerns about it. The final decision should be made sometime before President-designate Joan Gabel assumes her position this summer.

Campus reaction to the name-change movement has been mixed. Around 40 percent fall on either side of the issue; 20 percent have no opinion whatsoever. But the numbers are vastly different for university faculty and staff: an overwhelming 80 percent support renaming the buildings.

Why this discrepancy? From my vantage point, it all comes down to a single word: legacy.

Faculty, administrators and prominent alumni are invested in ensuring a university will be judged favorably by future generations. Students? Maybe not so much. But there is a paradox here. Students are ultimately responsible for shaping that future judgment. After all, it was the library and student organizers who initiated this conversation.

But how are names connected to the legacy of a sprawling enterprise, like a university? It’s complicated.

At a basic level, though, buildings are legacy symbols. Ideally, these names are meant to remind students that they are in this place because someone laid the foundation. As Isaac Newton prefaced the Principia Mathematica: “[We] stand on the shoulders of giants.”

Students are expected to think, this visionary person thought of you, without even knowing who you are—so take a moment, look at the name, and think about this person.

But I have a confession to make. I’ve walked into many university buildings and never thought much about the people memorialized on their facades. Once I left a campus behind, such names were quickly filed in the inaccessible part of my brain.

Unfortunately for Coffman, Coffey, Middlebrook and Nicholson, some students did take time to think about them.

What they discovered was more nuanced than the ideal: This person didn’t think about people like me. This person profiled students, used shady means to gain political ends, abided prejudice, or was otherwise not what this university should condone.

Such is the peril of placing the weight of legacy on a dead man’s (or woman’s) shoulders. The closer you look at the life of giants, the smaller and meaner and more human they become.

In an age where the tectonic plates of history are continually shifting, how confident can we be in the moral strength of the shoulders we stand on?

Perhaps such philosophical questions will soon become moot, anyway. Putting names to academic buildings is also a matter of dollars and cents. After all, buildings do not erect and fund themselves.

I believe the days are numbered when the generosity of lone individuals is enough to ensure that their names will be on the tongues of generations of future students. Just look at the names on newly constructed or remodeled sporting venues at the U of M, like TCF Bank Stadium. These are clearly corporate enterprises now. Will libraries, research labs and dormitories soon follow suit? Wouldn’t surprise me at all.

So what will those four U of M buildings become should the name changes get finalized?

At least for now, they will become what they already were: Student Union, Agricultural Administration Building, West Bank Residence Hall.

Kind of boring, right? Sort of like having a Student Center or a Library and Learning Center or a Midway Center (okay, so we don’t technically “have” that one).

But Metro State’s history and building names must wait for the second installment of “What’s in a name?” I’ll look at our legacy in next month’s newspaper.