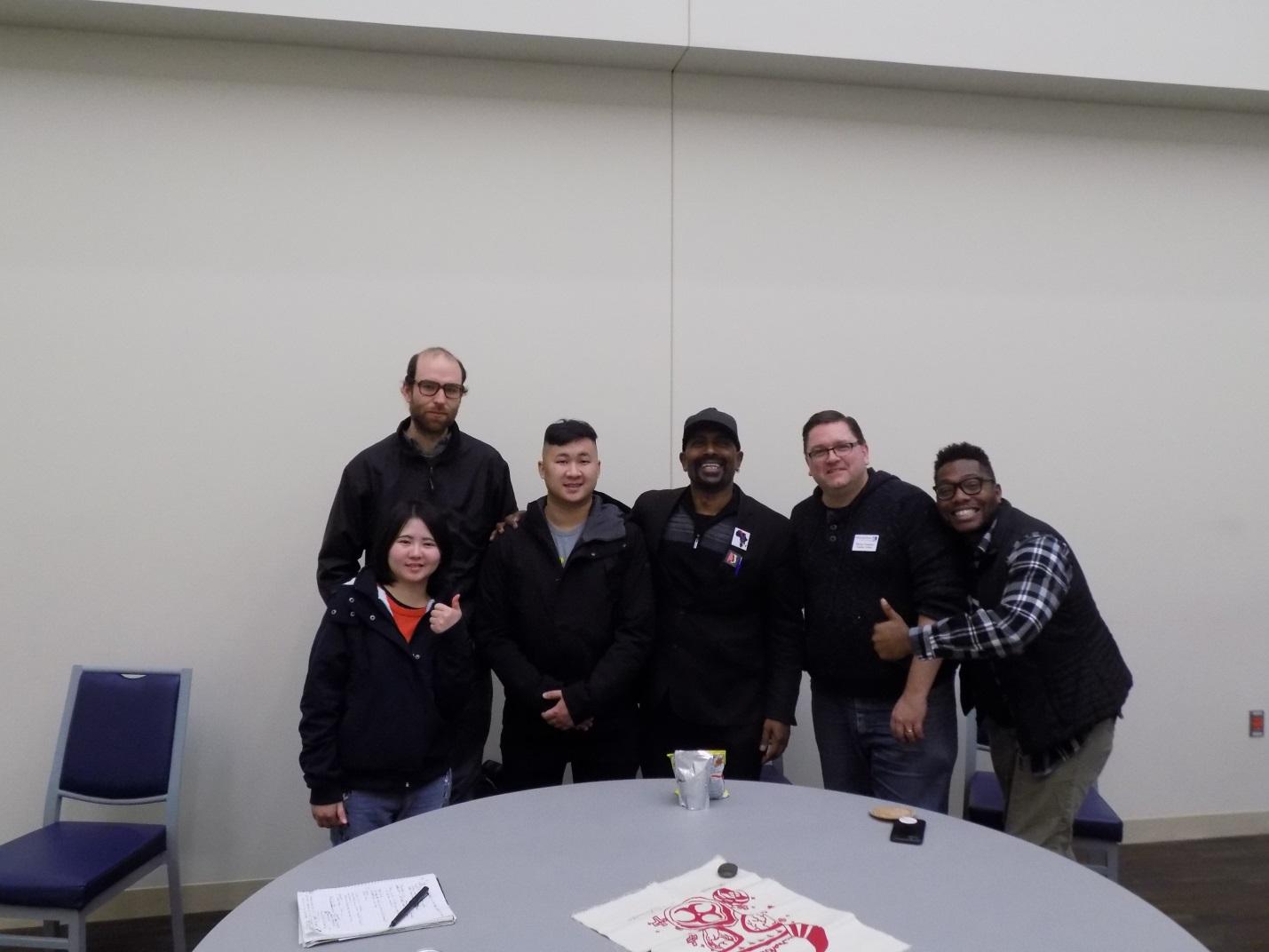 Students and staff gather around Professor Raj Sethuraju, center, at his “Step In, Step Out, Step Up” leadership workshop in the Student Center on Nov. 14, 2018. (Scott Lindell / The Metropolitan)

When Dr. Raj Sethuraju stepped in the door of Student Center 101 on Nov. 14, he was there to get students to “Step In, Step Out, Step Up” as leaders on campus and in life.

“What do we think of when we hear the word leadership?” he asked the group of students assembled.

Most of the responses mentioned jobs like CEO or president.

“We want to see leadership at the ground level,” he said. “We don’t have to be CEOs to make a difference.”

Sethuraju, associate professor of law enforcement and criminal justice, led the roundtable discussion at the invitation of the Student Life and Leadership Development (SLLD) department.

It was part of SLLD’s leadership workshops series for the 2018-2019 school year.

Sethuraju told the students that the most influential social movements start with students just like them.

“We all have a voice and should not be afraid to use it,” he said.

For him, leadership is about making a difference and a change for the better—no matter what your position in society. He gave many examples:  Saudi Arabian dissident and journalist Jamal Khashoggi, Marvel Comics legend Stan Lee, Nelson Mandela, and the “Tank Man” of the Tiananmen Square protests.

Throughout Sethuraju’s presentation, videos played in the background.

In one video, a Muslim woman in a hijab rapped, “so fresh and so eloquent… I keep it humble and elegant.”

Sethuraju encouraged the group to listen to the words of Mona Haydar, an American rapper and poet. Haydar’s music takes on racism, Islamophobia, violence against women, suicide and mental health. He said she is changing the narrative and people’s perceptions of Muslims as terrorists.

Later, a video played of a Ted Talk by Nigerian novelist Chimamanda Ngozi Adichie. Her speech, “The Danger of a Single Story,” reveals how dominant narratives breed misperceptions.

When Adichie came to the United States as a 19-year-old college student, her roommate was surprised to learn that she spoke English so well. English is the official language of Nigeria, Adichie told her.

When the roommate asked her to put on some of her “tribal music,” Adichie played Mariah Carey.

“My roommate had a single story of Africa. She had felt sorry for me even before she saw me.”

Similarly, people often form a single narrative about criminals, Sethuraju said. He showed the students some items hand-crafted by people in prison.

“They can write! They’re artists!” he said. “[People are] more complex than the single story.”

He challenged the students to break the single narrative and reject stereotypes. Leaders don’t use them to define other people, he said.

Sethuraju said everyone can be significant, even in small ways. He mentioned his role as a father and his work with youth and people in prison.

One-by-one, he asked the students to share stories of what makes them remarkable. Most of the responses equated the term to being “busy” volunteering.

Alistair Dam, president of the Mountain of Fire Campus Fellowship at Metro State, mentioned how important it is to “do what we can do to help.” He is proud of how he helped fellow students as a computer lab assistant at Century College.

Students who attended Sethuraju’s workshop said they appreciated the fresh perspectives they received.

Erik Leigh, treasurer of the Nursing Student Organization, praised Sethuraju for creating an “accepting, open environment” where students could freely share. He said Adichie’s story of the single narrative will stick with him.

SLLD’s leadership workshops will continue in the spring semester. Communications faculty Melissa Maier will present “Dealing with Difficult People” on Jan. 31. A session on “Marketing Leadership on your Resume” will be offered March 20, led by Kara Branyon, academic advisor in the College of Management, and Bill Baldus, Career Center director.