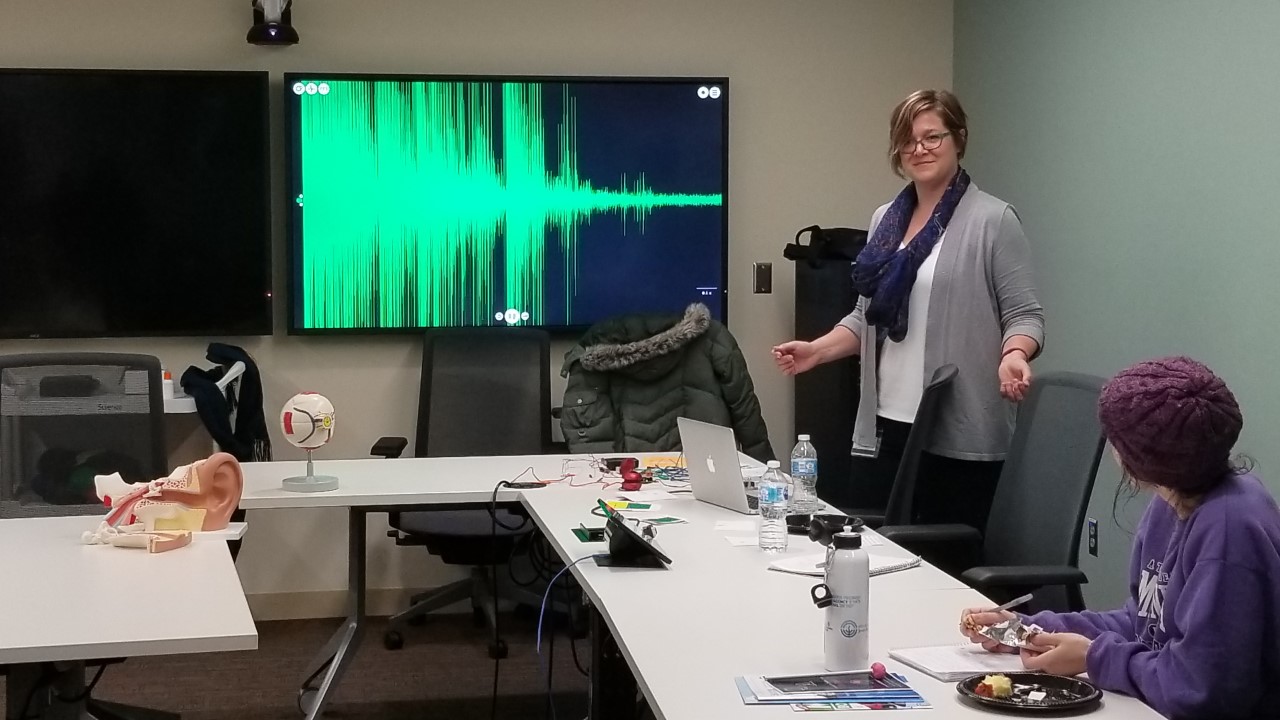 Dr. Cynthia Harley is a highly educated neuroscientist—but even the most experienced scientists make mistakes. Thankfully, a recent mishap resulted in more laughs than cries of pain for the Metro State natural science professor.

In true Monty Python fashion, she ended up connecting to every finger’s motor neurons but her middle finger. The result? She flipped herself off.

“Best thing ever!” was how she described her neuroscientific slip of the finger to the audience at her lecture in the Student Center on Wednesday, March 13.

In celebration of Brain Awareness Week, Metro State’s Psychology Club invited Harley to discuss the human brain. This is the second year the club has partnered with the Dana Foundation, a nonprofit organization that informs the public about advances in brain research.

The informal nature of Harley’s lecture was a surprise to the audience of 12 students. Crissy West, a psychology major and club president, said she was expecting a formal sit-down lecture, but enjoyed how casual and hands-on it ended up being.

Over the course of an hour, Harley and her colleague Professor Therissa Libby, human services department, discussed how the brain is influenced by outside forces.

Libby illustrated this through an exercise, with West as a voluntary test subject.

The professor drew two boxes on a whiteboard. She gave West instructions to aim a rubber ball and try to hit the smaller of the two boxes.

Over several attempts, West hit the smaller box with a decent degree of success.

But then Libby handed West a pair of prism goggles, a tool used by neuroscientists to distort the vision of the wearer.

With trippy eyewear on, West repeated the experiment. Predictably, her aim was way off, to the left of her target. With coaxing from the audience, she was able to adjust her aim and hit the target consistently.

The professor then motioned for West to remove and hand over the goggles. West tried her target again. This time her aim was off by a good margin to the east.

Libby and Harley then explained how the brain subconsciously adapts to changes.

Harley illustrated, with a softball-sized model of the eye, how the neurons between the brain and the eyes can be influenced to make objects disappear and reappear.

Earlier Harley had passed out a set of three different optical illusions. Everyone grabbed the top one and held it up to their face at eye level. Close or cover your left eye, she told the group, and move the illusion back and forth until the black dot disappears.

The dot disappears due to the eye’s blind spot, Harley said. This phenomenon is caused by our brain being cut off from information we would usually receive from our left eye. Based on what information is available to it, the brain fills in the gaps. Ergo, the black dot disappears.

“This is why psychology is so fascinating,” said Ashly Wunderlich, an individualized studies major. She left the event with much on her mind and a head full of new knowledge.

For more information on the Psychology Club, visit their website orgsync.com/47774/chapter.