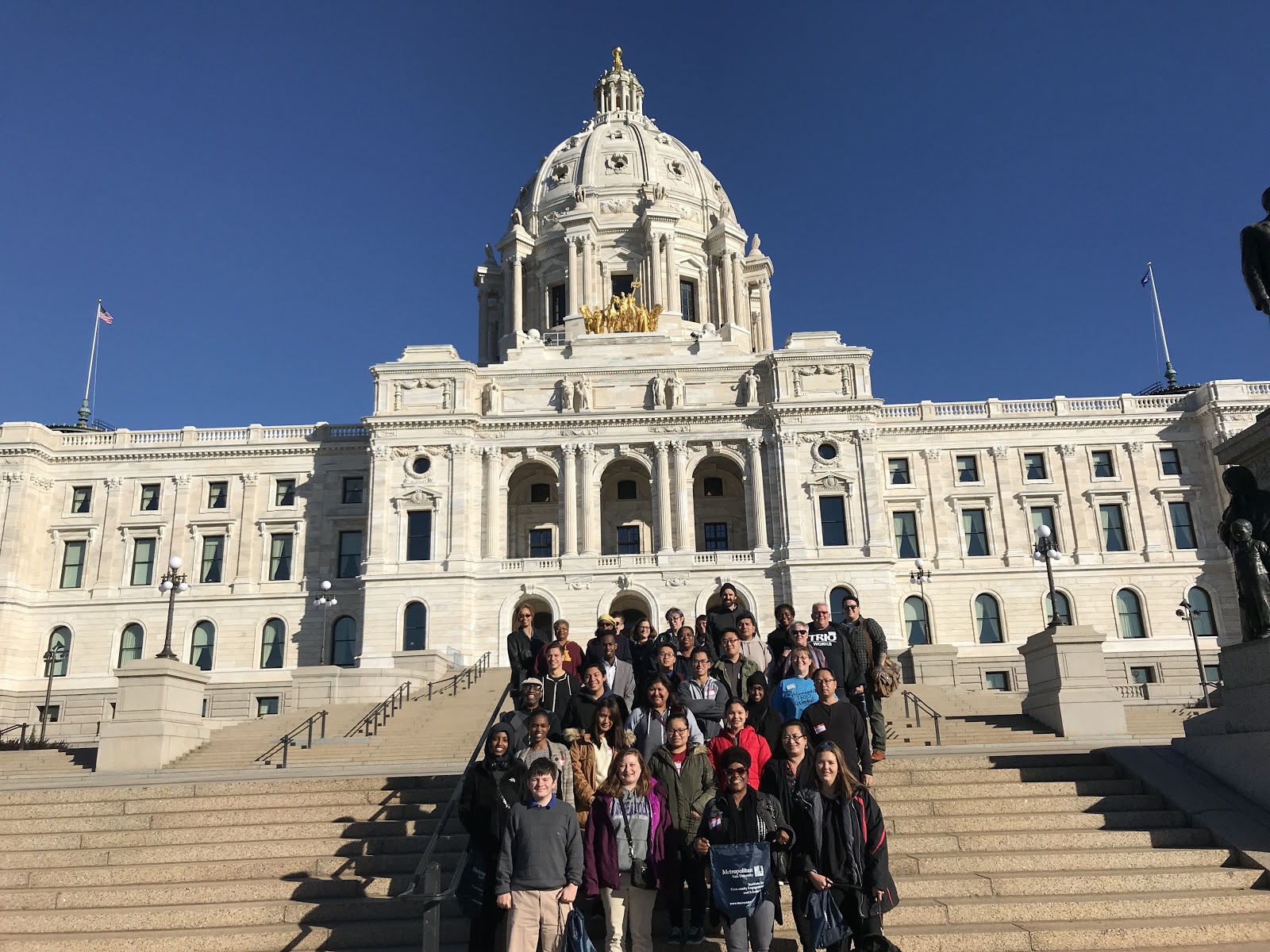 A large part of being a leader, in my opinion, is to be involved. That involvement can be with school, work, family or politics.

I am a peer mentor for TRIO, a program that guides students toward graduation. The participants are first-generation college students, come from low-income families or have disabilities.

Together we expressed our involvement—and leadership—as TRIO students by traveling to the Minnesota State Capitol for the TRIO Leadership Summit on Wednesday, Oct. 17.

When we arrived at the Capitol, we began with a general tour of the building. But the tour wasn’t simply a guide showing us around. Our guide explained the deep history and meaning behind the paintings in the building.

One painting in the Governor’s reception room caught my eye. “The Battle of Nashville” (a mural-size painting by Howard Pyle depicting Minnesota’s Civil War regiments) captured soldiers so acutely you could see a soldier losing color in his face as he confronted death. The accuracy of the painting caught me off guard; it resembled a photograph.

We finished the tour by visiting the roof, where our guide told us that Minnesota has the biggest capitol dome of any state.

After the tour, we had the opportunity to hear from two guest speakers.

Sen. Scott Dibble, D-Minneapolis, talked with us about claiming our voices as U.S. citizens.

Some people dismiss the idea of voting because they think their voices won’t be heard. But Sen. Dibble argued otherwise. He used himself as an example to represent the power of voting. He started small by advocating for issues that concerned him. This led him to join organizations. He found his calling and then ran for office.

Of course, not everyone has to become a state senator like Scott Dibble to be involved. All you have to do is vote. Voting can give you a voice.

Our second guest speaker, Deputy Secretary of State Jake Spano, explained the voting process to us.

Voting in Minnesota is fairly easy, he said. All you need is to be 18 years of age and clear of probation. Minnesota also offers early absentee voting.

Spano said our state uses paper ballots to allow for more accurate voting counts. In case there are accusations of vote rigging, the paper ballots are stored for 22 months, so if needed they can be recounted.

I came away feeling that in Minnesota, voting won’t be manipulated. Our votes will always matter. It makes me proud to live here.

We concluded the summit with a thought-provoking session with Miki Huntington, a faculty member at Minneapolis Community and Technical College and Metro State.

She asked us to think about a political subject that we were concerned about. She quickly identified a common worry of us all: education.

For TRIO students, obtaining a college education isn’t easy. There are many financial and physical barriers.

TRIO students picking education as a concern wasn’t a surprise to me. The surprise was when Huntington asked us: What would you do to improve education? And where would you get the budget for your project?

This is where everyone got stuck. We were focused on improving education but hadn’t stopped to think about how we would do it.

However, when Huntington asked us the question about budgets, I was speechless. I had no idea how to fix the problem of expensive textbooks; I just wanted it fixed.

But the summit helped me to see that in order to truly use your voice, you have to be involved in both your issue and figuring out how to improve it.

President Obama—and the TRIO Leadership Summit—had a point. I will start using my voice by voting for the first time on Nov. 6.

Arab is a Metro State student and a TRIO peer mentor.