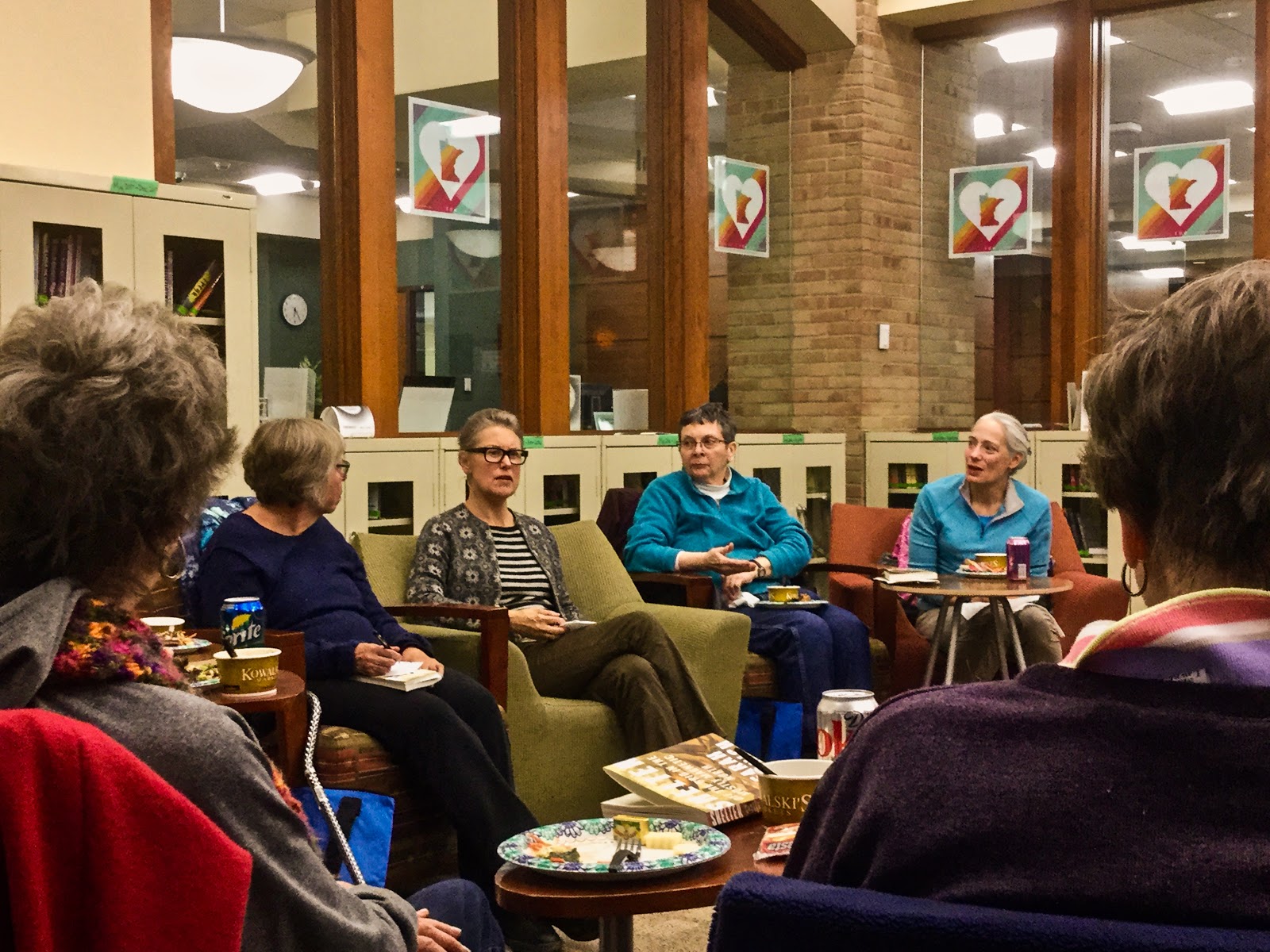 Minnesota author Sarah Stonich, center, discusses her memoir “Shelter: Off the Grid in the Mostly Magnetic North” with members of the Dayton’s Bluff Book Club at the Metropolitan State Library and Learning Center on Nov. 7, 2018. Photo by Margot M. Barry

When Minnesota author Sarah Stonich joined the Dayton’s Bluff Book Club in the Metro State Library lounge on Nov. 7, members introduced themselves to the author and shared why they participate in the club.

“[It] exposes me to books I’d never select on my own,” said one member. Another said they enjoy “meeting different people and getting the different opinions.”

The Dayton’s Bluff Book Club is for people who live, work or attend school on the East Side. It was formed in collaboration between the Metropolitan State University Library and the St. Paul Public Library (SPPL).

Through book discussions with guest facilitators, readers engage with the writings of Minnesota and Midwest authors—particularly those underrepresented in print.

Stonich joined the group to facilitate the discussion of her book “Shelter: Off the Grid in the Mostly Magnetic North,” published by the University of Minnesota Press. “Shelter” is a memoir that offers a particular appreciation and affinity for the people of the Iron Range in northern Minnesota.

“Very little written gives the perspective of the people who live there [on the Iron Range],” said Stonich. “Differences exist, but cooperation is almost a survival skill.”

New perspectives, differences and survival are themes in many of the club’s 2018-2019 book selections.

In December, William D. Green will facilitate the discussion of his nonfiction work “Degrees of Freedom: The Origins of Civil Rights in Minnesota, 1865–1912.” Green is a professor of history at Augsburg University.

February’s read will be the book-length poem “Citizen: An American Lyric” by Claudia Rankine. The discussion will be facilitated by musician/composer/writer and professor of African American literature Davu Seru.

March’s pick is the short story collection “What it Means When a Man Falls From the Sky” by Lesley Nneka Arimah. Discussion will be facilitated by Shá Cage, a Twin Cities playwright, actor and spoken word poet.

Professor Emerita Adela Peskorz will lead the discussion of April’s selection, “A Hope More Powerful Than the Sea: One Refugee’s Incredible Story of Love, Loss, and Survival” by Melissa Fleming.

Metro State and SPPL have a unique relationship in the world of academic and public libraries in that they share a building and the goal of collaborative community outreach. The building itself was erected in 2004 with funding from the Minnesota Legislature, grants, and additional private and public contributions. The Dayton’s Bluff Book Club is an example of shared interests in outreach and engagement.

Their approach to book selection has two steps. First, they compile an initial list by combing through lists of award winners and nominees for titles that meet club goals. Then Filkins said the book lists are narrowed with an eye to social justice and to “help us to think in terms of how to move forward collectively.”

After the lists are prepared, the club members have the final say on the year’s selections.

Books are purchased from Birchbark Books in Minneapolis through funding provided by Metro State’s Library Endowment. By keeping it local—in book selection, facilitator and purchasing—club members and guest facilitators have the opportunity to engage each other in a calm space without the pressure of selling books. Conversation flows where the members’ curiosity takes it.

The club “is not about dissecting books as you would in academic context, but to make the practice of reading a part of people’s lives,” said Filkins. “Reading as a practice. Reading as social. Reading as communal.”

In sustaining and further developing the Dayton’s Bluff Book Club—and all of the Metro State Library and SPPL collaborations—Filkins added the hope is to “Keep it vital. Keep it meaningful. Where reading starts to become a part of their lives in a different way.”

To learn more about the Dayton’s Bluff Book Club, including all of the titles since its start, see guides.sppl.org/dbbookclub. To join the club, contact Michelle Filkins at michelle.filkins@metrostate.edu.