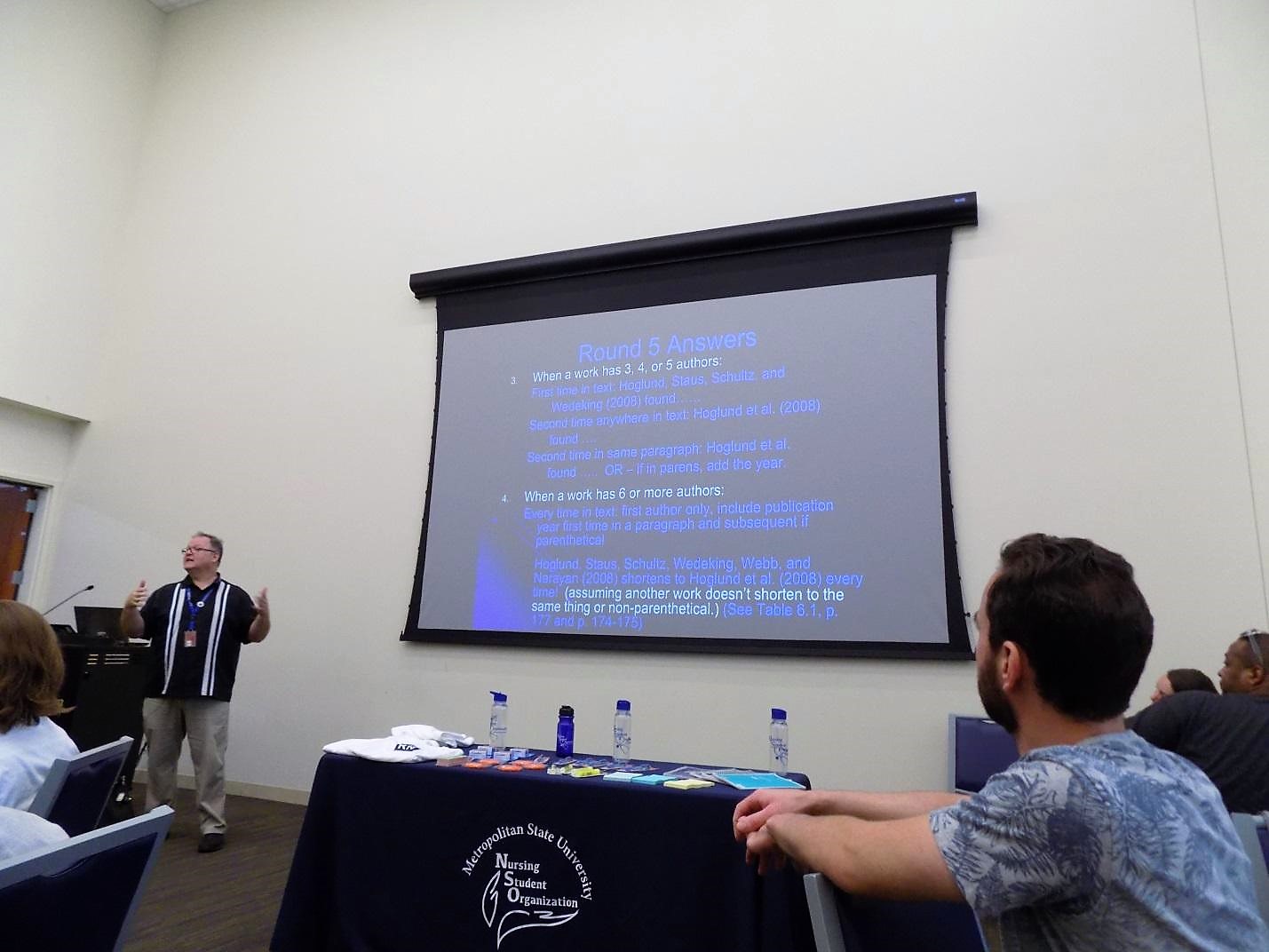 Dr. Brian K. Goodroad, associate professor in the College of Nursing and Health Sciences, leads nursing students in the APA Scavenger Hunt in the Student Center on Sept. 17, 2018. Photo by Scott Lindell.

APA style is most commonly used to cite sources within the sciences, psychology and education.

“Getting you more comfortable with the APA manual is our goal for today,” said Dr. Brian K. Goodroad, associate professor of nursing, and host of the hunt since 2010.

According to Dr. Deborah Matthias-Anderson, NSO faculty advisor and associate professor of nursing, almost all of the scholarly papers in nursing are in APA format. She said that the scavenger hunt reviews the “most important things that students struggle with” when writing and citing. Faculty does not want students to lose points on assignments due to APA citation errors.

Goodroad said his time as an undergraduate student at Metro State helped him learn how to write. He mentioned things that can go wrong when formatting a paper in APA style, and pointed students to a 13-step handout on properly setting up a Microsoft Word document.

As the competition began, Goodroad laid out the rules: show teamwork and have fun. He told students to mark their APA manuals for future reference. Tagging pages with colorful sticky flags could help them remember and locate style rules when writing.

Each round, students tackled many challenging questions. “What type of spacing is used in APA between lines in your manuscript?” “How would you arrange the reference list if there is more than one article by the same person published in the same year?”

Students also learned that “the data are correct”—not “the data is correct.”

Professor Matthias-Anderson made sure every group had a chance to give answers and win prizes. She liked how a collaborative and fun activity helps students learn complicated rules.

Nursing student Tommy Reyes competed in the scavenger hunt to earn extra credit for one of his courses. But Reyes said that he got much more from the event. As a student just beginning the Master in Science in Nursing program, he liked how the program introduced him to writing resources and how to use them. He said it gave him a “refresher on how to write” just when he needed it.