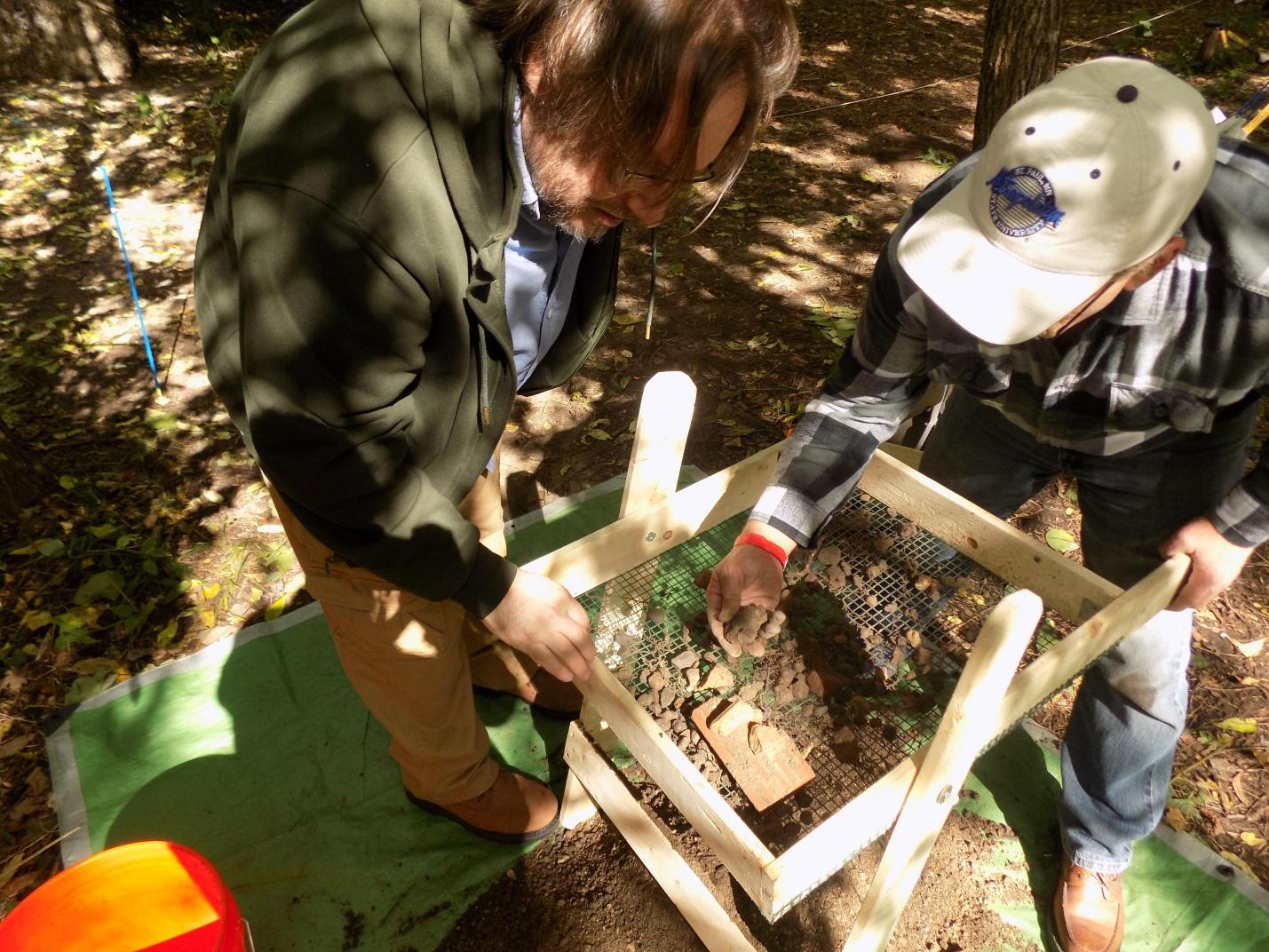 As soon as student Ken Philpot heard about an archaeological dig organized by Metro State’s First-Generation College Student Organization (FGCSO), he signed up for the Sept. 21 event.

Philpot thought the dig would qualify as an observation exercise for his cultural anthropology course—and help him realize a lifelong dream.

“I always thought that would be cool to do someday,” Philpot said, recalling archaeological scenes from movies like Indiana Jones. “Now I am actually doing it.”

The daylong archeological digs took place on both Sept. 21 and 22 in Swede Hollow Park, located just steps from Metro State’s St. Paul campus. The digs were free and open to the public.

Wendy Roberts, FGCSO president, said the digs were a career exploration activity and a way for college students to “get hands-on experience.” She said it can be more difficult for first-generation students to enter academic fields like archaeology.

The dig was led by Dr. Daniel Kreutzer, community faculty member in social science at Metro State. He was assisted by his former student, Andrew Roberts.  Roberts, a recent Metro State graduate in history, is now pursuing a graduate degree in anthropology from the University of Wisconsin-Milwaukee.

Kreutzer began by discussing the history of Swede Hollow dating back to 1840. The area housed generations of immigrants from Sweden, Italy and Mexico. At its peak, Swede Hollow had more than a thousand residents, Kreutzer said.

In 1956, sanitation concerns caused the city to evict the remaining people and burn down existing homes. St. Paul turned the area into a park in the 1970s, and now few remnants of the settlement remain above ground.

Kreutzer directed the group to an unpaved, forested area of the park for a reconnaissance survey.  He said the students would dig test pits to find evidence of human inhabitation below the surface. They might discover discarded garbage from many years ago as the land had not been excavated by anyone before. In 2015, University of Minnesota graduate students conducted a similar dig in another part of the park.

Digging on public lands is not something anyone can do. Kreutzer had to secure permits from the city.

“All the stuff that we find is property of the state [of Minnesota],” he told the students. Anything significant would need to be turned over to the Minnesota Historical Society, and he would send a two to three-page report on the dig to the Minnesota Office of the State Archeologist.

Roberts hauled a bucket of equipment that included shovels, meter sticks and shears. He instructed students to place flags in spots where they found things “people related.”

On the soil surface, the students found modern debris like batteries, plastic and pennies.

To find artifacts below ground, Kreutzer showed the students how to excavate a 20-centimeter circular hole, in compliance with state requirements. Once a bucket was full of soil, the students brought it to a tarped area. They used a rocking sifting screen to separate objects from the soil. Roberts placed relevant items in a brown paper bag labeled “Test 1 0-20 cm.”

Then, the students returned to the same spot to extract more from the first hole. Roberts labeled a second bag, “Test 1 20-40 cm.”

They repeated the same process for three more digs. The last hole was a ways off from the others. Roberts designated this one as a “control.”

Amid the soil and rocks, the students discovered old nails, blown glass pieces, brick fragments, a rubber stopper, and something that resembled a reddish deck tile. The presence of charcoal and burnt limestone indicated that some of the items had been exposed to fire.

Roberts said the next step would be to document and analyze all of the relics to determine their meaning.

But an archaeological dig is “not about finding things,” Kreutzer told the students. What is important about a day devoted to fieldwork? “The opportunity to get experience outside of the classroom,” he said.

A cure for the winter blues