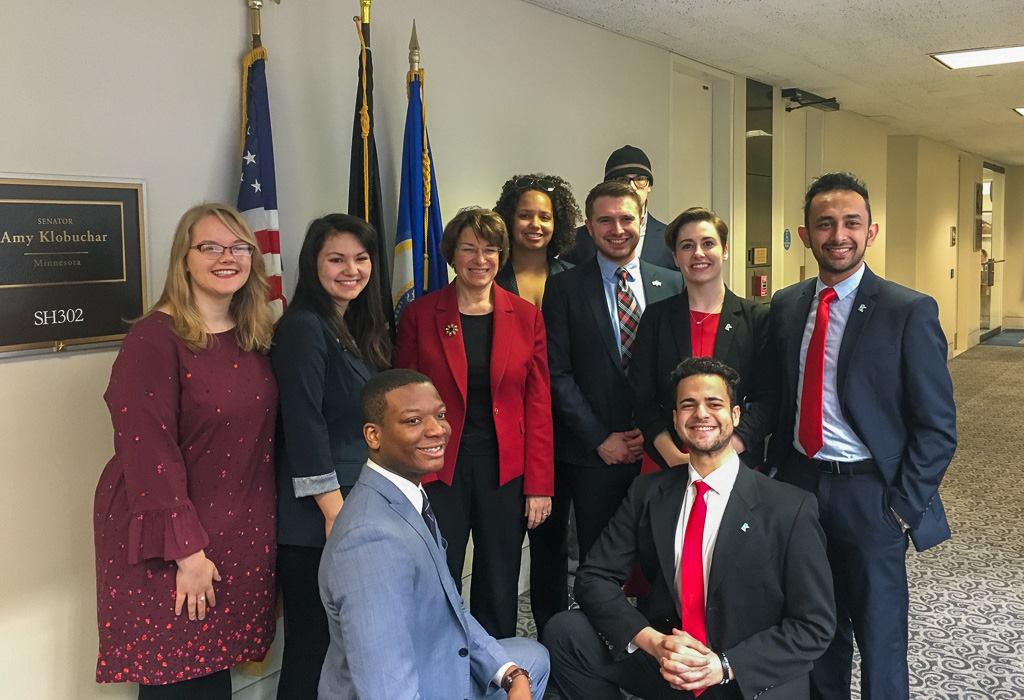 Over spring break, Minnesota State student leaders skipped the beaches and headed for the halls of Congress.  Students United, the statewide advocacy group, sent nine university students to Washington, D.C. with a lengthy legislative agenda and a mission to lobby lawmakers.

The delegation included Faical Rayani, a Mankato State student and state chair of Students United. He said the main point of the Washington trip, March 6-9, was to connect students with elected officials. “We remind legislators who they’re representing, who students are, and show them the real issues we’re facing,” he said.

Heather Moenck, president of the Metropolitan State Student Senate, also made the trip.

The Students United board finalized its federal legislative agenda in November 2017 after receiving input from student representatives from every campus.

“The [issues] are chosen by the students based on what they’re interested in, which helps because if we were just told to go lobby on things we weren’t really interested in, it wouldn’t be very effective or compelling,” said Lexi Byler, a Minnesota State University Moorhead student and vice chair of Students United.

In Washington, the students advocated for financial aid programs like the Perkins Loan and Pell Grant. They voiced their opposition to proposed changes to Title IX, the law that prohibits sex-based discrimination in federally funded education programs.

The nine students trained with a lobbyist employed by Minnesota State. They were advised to share personal anecdotes to back up facts, and to relate issues back to their specific campuses.

And the indispensable lobbying lesson?  “Be concise—you don’t need to talk for an hour to be effective,” said Byler.

They made a point to speak to lawmakers on behalf of student recipients of DACA, the Deferred Action for Childhood Arrivals program. The Trump administration is trying to rollback the program that protects young undocumented immigrants from deportation.

DACA recipients are concerned for their personal safety and cannot reveal their identities, students said. While they do not have statistics on how many DACA recipients attend Minnesota State universities, Rayani knows of at least 16 such students at Mankato State.

“Legislators know there are people out there who have utilized DACA and are losing it,” said Byler. “But we give them a face-to-face with students who know students who are going through this uncertainty and fear.”

The annual trip to Washington is just one component of Students United’s advocacy work. Earlier this year, the organization was successful in lobbying the Minnesota State Board of Trustees on the issue of affirmative consent.

The trustees gave their unanimous approval of “yes means yes” as the standard of consent for sexual activity. At the Feb. 21 board meeting, trustees amended the definition of consent in policy 1B.3: “Consent is informed, freely given, and mutually understood willingness to participate in sexual activity that is expressed by clear, unambiguous, and affirmative words or actions.”

Students United leaders attribute their success in part to the national #MeToo movement. But they said they took nothing for granted when planning their advocacy campaign. Their lobbying efforts took them to the offices of Title IX coordinators, chief diversity officers and university presidents.

“We really didn’t leave anybody out of the conversation,” said Byler.  “We met with every Student Senate and every single Student Senate was unanimous in supporting affirmative consent.”

Students United leaders cheered the recent appointment of Minnesota State Chancellor Devinder Malhotra, who had been serving in an interim capacity since August 2017.

“He’s been just great to work with,” said Byler.  “He’s been a huge partner with us on affirmative consent and I’m not sure if someone else was in that chair, that it would’ve happened because he was the one that first pushed it from within the system.”

The trustees offered the position to Malhotra over three external candidates identified by a search firm. Rayani served as the student representative on the search committee.

“I don’t think this was a failed search,” said Rayani. “This was a successful search because we were able to identify a candidate that will serve in the role for three years and we came to the realization that [Malhotra] was the best candidate.”

Lobbying at the Legislature

Next on the Students United agenda is advocating at the Minnesota State Capitol on March 28. Students will ask state lawmakers to fully fund the Minnesota State system, including allocating $130 million for Higher Education Asset Preservation and Replacement (HEAPR) projects on campuses.

“Metro State is fortunate to have a lot of new buildings, but some of our campuses are pretty rundown,” said Byler. “It is not OK to have our students in buildings that aren’t even functioning.”

The organization also hopes to put textbook affordability on legislators’ radar. Students say classmates are spending an average of $1,200 a year on textbooks, not counting “hidden costs” like access codes for online materials. They want to see upfront notice of book prices when students register for classes.

They also want to train students on how to talk their professors about selecting less expensive textbooks. Grants to faculty who opt for open source educational materials are a possibility too. “We’re working to try to incentivize it— we can’t force faculty to do anything,” said Benjamin Uecker, a St. Cloud State student and treasurer of Students United.

Though Minnesota State tuition rates are frozen for the 2018-2019 school year, Students United leaders want legislators to keep the high cost of higher education in mind—and to not put it all on students’ backs.

“Affordability is something that our organization is going to be working on for the foreseeable future,” said Byler. “We may have the lowest tuition in the state, but it’s still way too expensive and a huge burden on students.”

[Since these interviews were conducted, Students United held their State Advocacy Day on March 28. The organization reports that 50 Minnesota State university students participated and met with 30 legislators.]