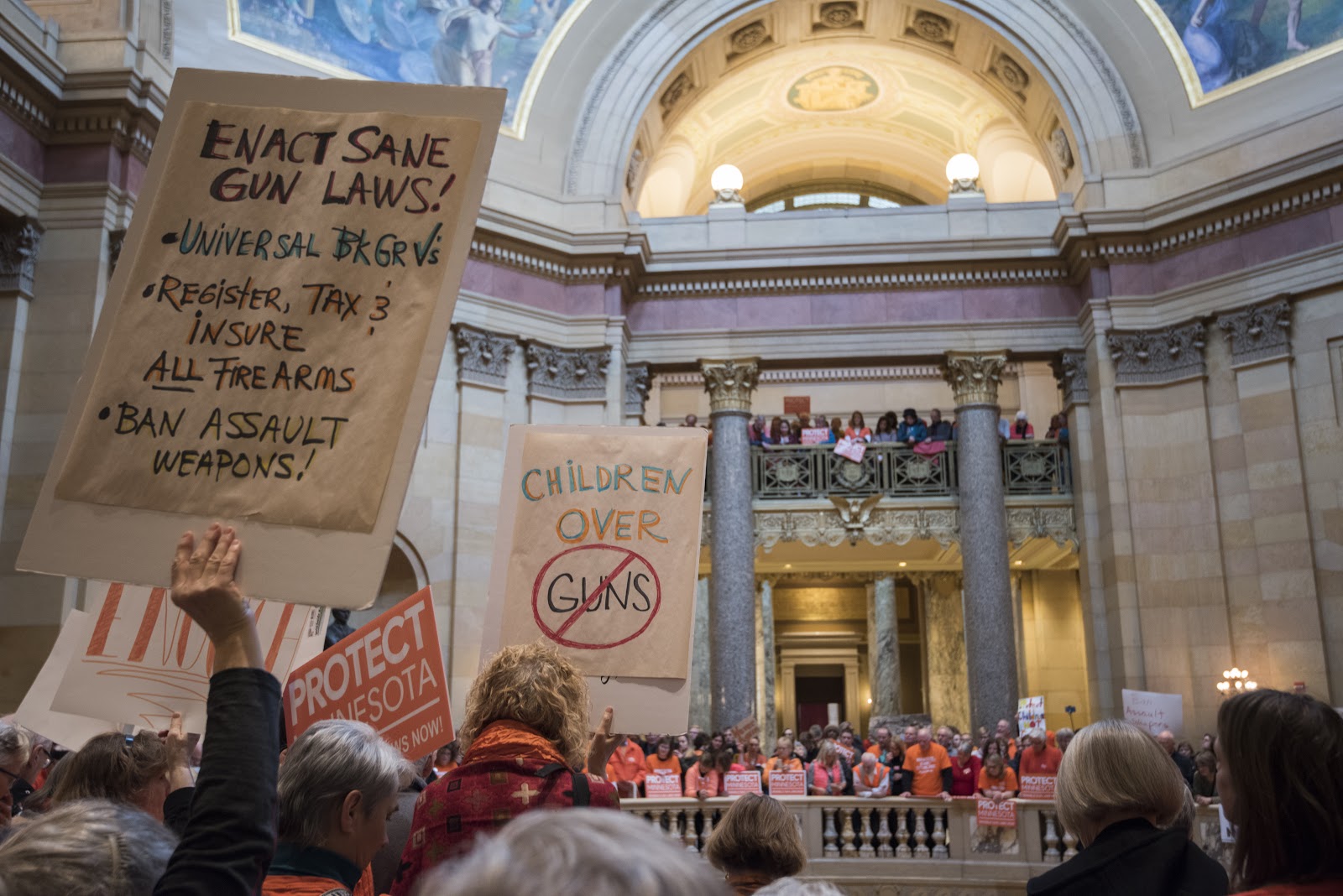 Demonstrators rally for gun control legislation in the Minnesota State Capitol rotunda on Feb. 22, 2018. The rally was organized in the wake of the mass shooting at Marjory Stoneman Douglas High School in Parkland, Florida on Feb. 14. Photo by Fibonacci Blue/Flickr Creative Commons

It’s time to admit it.

It’s time to stop denying it.

Something needs to be done.

America’s unhealthy obsession with guns is killing our kids.

The United States is the only industrialized country with gun control laws that are anemic at best. America is also the only country to experience a staggering number of mass shootings.

According to the Washington Post, “more than 150,000 students attending at least 170 primary or secondary schools have experienced a shooting on campus since the Columbine High School massacre in 1999.” Mass shootings in educational settings have hurt students of all ages: from first graders to high schoolers to college students.

That leaves me asking a sobering question: are we safe at Metro State?

University policy (#1080) prohibits any student or faculty member (even if he or she is licensed to carry by the state of Minnesota) from possessing a firearm on campus property. Exceptions are granted to peace officers and law enforcement students engaged in university sanctioned target practice.

As with all colleges and universities across the nation, Metro State has an active shooter protocol to keep everyone safe. But following protocol is not enough. We cannot stop there.

We need a proactive, rather than a reactive solution to gun violence. The solution is not to arm educators or to relax conceal and carry laws. Putting more firearms into the hands of the “good guys” like teachers and well-meaning citizens will not keep weapons out of the hands of “the bad guys” like domestic terrorists. This only gives the National Rifle Association (NRA) a more persuasive argument to sell guns.

Prevention is the best solution. Passing stricter gun control legislation is the ONLY way to protect us against mass shootings.

Plenty of Americans argue that they have a Constitutional right to own guns. But why should their right overrule everyone’s else right to safety and security? The Second Amendment was written when firearms were a relatively new invention. It’s time we stop using 16th century language to discuss 21st century weapons. There is no justifiable reason for civilians to own semi-automatic weapons, bump stocks or assault rifles.

I stand with the students who walked out of their classes in Florida, Minnesota and many other states. Like them, I say it’s time for real gun control legislation.

It’s time to require universal background checks, to ban bump stocks, to outlaw private sales of firearms, to ban assault rifles, and to protect the safety of my generation and many more to come.

Fellow students, take the time to call your elected representatives. Find out if they take money from the NRA and let them know how you feel about it. Make sure you’re registered to vote so you can support candidates committed to gun regulation reform. Visit sos.state.mn.us/elections-voting/register-to-vote/ to register to vote.

It’s time we students stand up for the safety of our schools—and ourselves.

Get with the program

Why books should be sacred in the wake of cancel culture