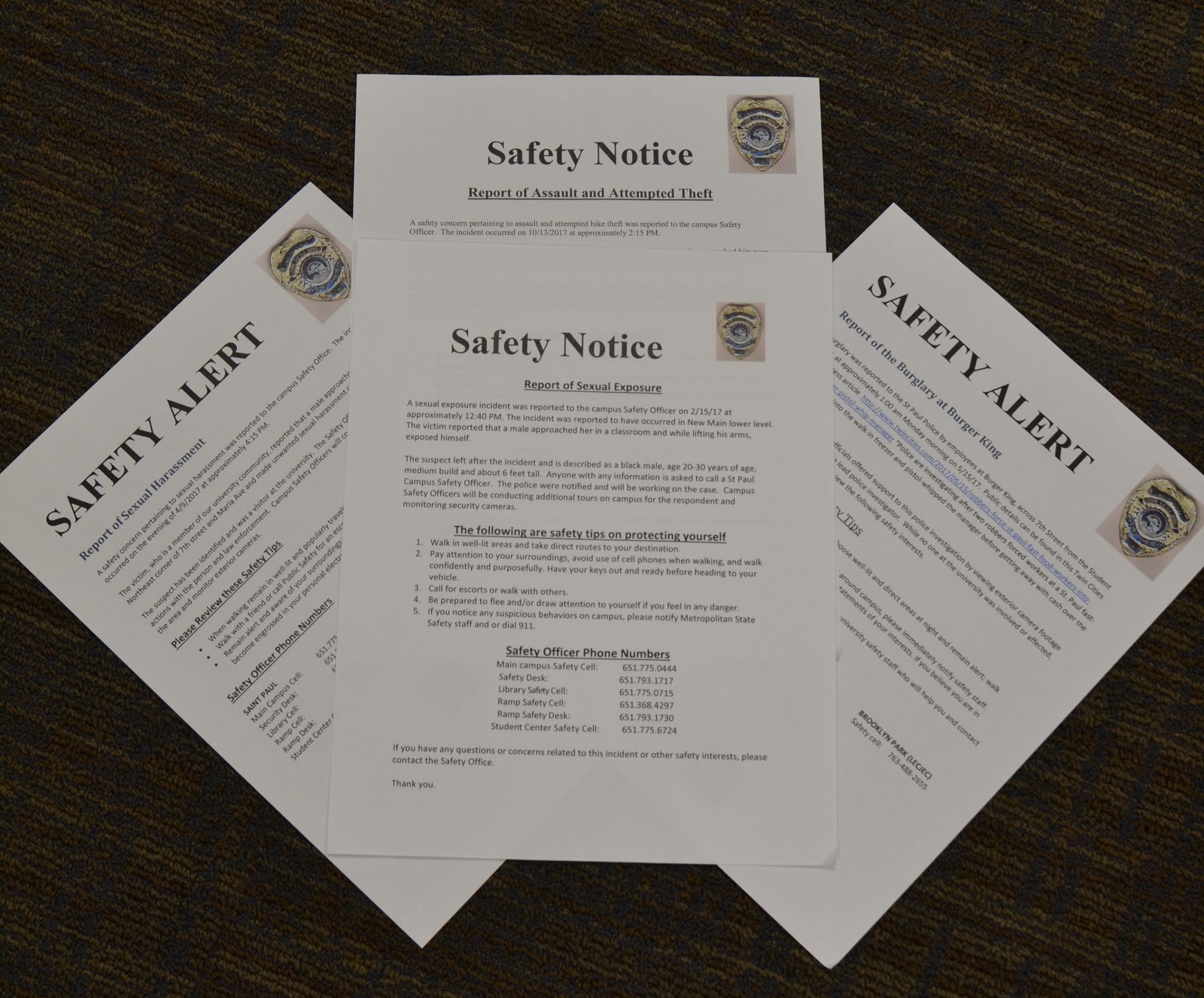 According to policy, the Safety and Security Office issues campuswide safety notifications when a situation "constitutes an ongoing and continuing threat to the university community." Safety notifications are distributed via email and paper flyers. They are also posted on the website metrostate.edu/student/university-info/university-info/safety-and-security/campus-security-reports. Photo by Kathryn Ganfield

A man entered the Psychology Lab on the lowest level of New Main midday on Thursday, Feb. 15. He approached a woman inside and exposed himself to her.

The suspect left, and the victim called campus security.  Officers took the victim’s statement and did “security sweeps” across the St. Paul campus, said Director of Public Safety Thomas Maida. The suspect was not found. The St. Paul Police Department was notified, but the victim declined to speak with police or file a police report.

The initial report said the victim only saw the man’s underwear. But the following morning, Maida heard from Dean Frank Schweigert of the College of Community Studies and Public Affairs that the victim had actually seen “bare skin,” Maida said. The seriousness of the incident then warranted alerting the campus community, per the university “Procedure on Timely Warnings and Emergency Notifications.”

Maida created a safety notice flyer titled “Report of Sexual Exposure.” It included the date, time, location and description of the crime.  One hundred copies of the flyer were posted on doors and bulletin boards around the St. Paul campus.

In addition to hardcopy notices, university procedure mandates that warnings “be issued through the university email system to students, faculty and staff.”

Maida emailed out the safety notice at 12:58 p.m. on Friday, Feb. 16.  The subject line read, “Safety Alert… Report of Sexual Exposure.” It contained the same information as the paper flyer.

Faculty and staff received that email in their inboxes, but students did not—a fact discovered in an investigation by The Metropolitan.

When reporters saw the safety alert flyer posted on the doors of the Student Center on Monday, Feb. 19, they left messages at Maida’s office requesting more information. While waiting to hear back, they queried several faculty members who said they received a safety alert email from Maida.

A faculty member provided a copy of the email to The Metropolitan. It was addressed to metro-announce@lists.metrostate.edu.

The Metropolitan surveyed dozens of students to find out if they had received the emailed safety notice. None had.

When The Metropolitan reached Maida on Tuesday, Feb. 20, he was surprised to learn that students had not received the email. He said he addressed it to the “Metro Announce” list, the community faculty list, and the registered students list (students-registered_20185@lists.metrostate.edu).

Maida then looked back at all seven safety notifications he emailed in 2017, including notices of severe weather and bloodborne pathogens. To him, it appeared he correctly addressed the emails to reach staff, faculty and students.

He said he had every intention to notify students as required by campus policy. “This is bigger than just this one incident, if these aren’t getting out to students,” Maida said.

Maida forwarded his safety alert emails to ITS and asked them to analyze whether they had reached their intended recipients.

Reed acknowledged that the Feb. 16 safety alert email failed to reach students’ inboxes, even though Maida addressed the email to the registered students list. The ITS analysis “took some time,” but the issue was identified, Reed said.

“Nothing was broken,” said Reed. “But it didn’t work as the sender intended it to.”

He emphasized that campus safety and security followed proper protocol.  “It’s a very unfortunate situation that happened,” said Reed. “But it wasn’t that there was negligence.”

Reed said there are tight controls over who can send emails to lists like “Metro Announce” and registered students. Emails from non-authorized users will not go through, he said.

Campuswide email lists have “controls that are put in place so it doesn’t get overused because then it loses its validity for why we are using it,” said Reed. “But what happened is the filtering of those controls filtered out this email.”

The filtering issue is now fixed, he said. Going forward, ITS will have “multiple ways” to verify that emails reach the intended lists. Authorized senders will receive a confirmation email that their message reached the intended lists.

Reed said he does not know how long the filtering issue has been occurring or if it affected messages from other authorized senders like the President’s Office.  “We really wanted to make sure that we’ve identified it, and then move forward,” he said. “So we haven’t invested the time to look back.”

“We thought the staff resources necessary to go back —we’re not sure that would add value, as opposed to making sure the process works going forward,” said Hatch, who oversees campus safety and security as part of her duties.

She pointed to the “redundancies” built into the safety protocols that ensure the campus community is alerted quickly to potential dangers. “Email is important, and good old signage posted around campus is important too,” she said.

Hatch started her work at Metropolitan State in January. She plans to make the university’s financial health and campus safety her top two priorities.

“It is our intention to alert students, just as we alert faculty and staff,” said Hatch. “We wish the notification had gone out as the system was designed to do.”

And what of the indecent exposure incident on Feb. 15? The campus investigation continues.

Maida issued a BOLO—be on the lookout— to campus security officers. It included a detailed description of the suspect and a photo of him captured by a security camera in the hallway outside the Psychology Lab.

The Feb. 16 safety notice described the suspect as a black male, age 20 to 30 years old, about 6 feet tall and of medium build. “We believe he is a patron of the library, and came over the skyway into New Main,” said Maida.

Security officers have the authority to issue ‘no trespass’ orders to ban people suspected of crimes from campus for up to one year. “If we locate [the suspect] on campus, we would give that maximum amount,” said Maida. “If he were to return again, he would be arrested for trespassing.”