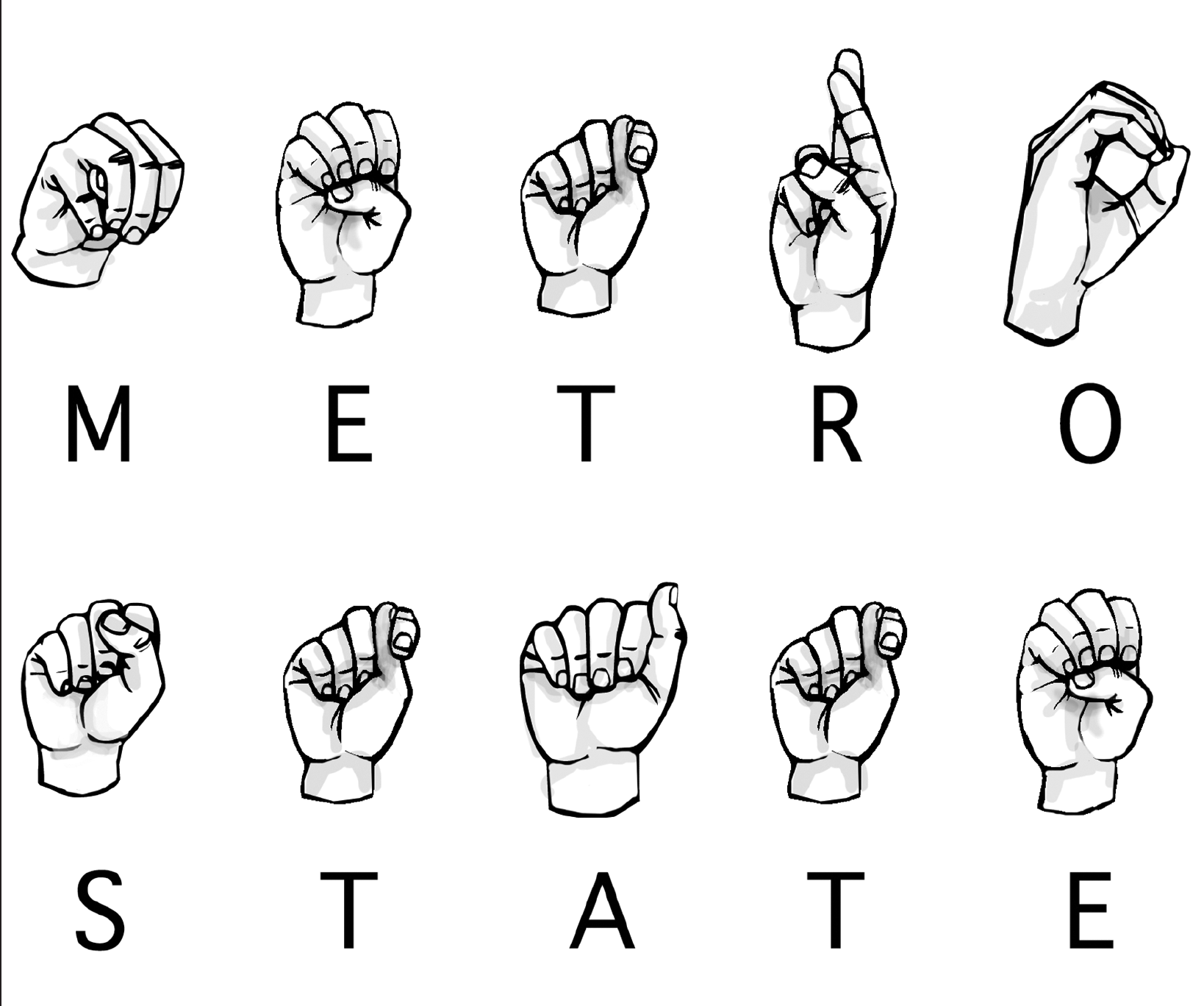 Improving the bond between deaf and hearing people on campus is the aim of Metro State’s American Sign Language (ASL) Student Organization.

“We don’t have to be divided,” said Rebecca Demmings at a November 2017 workshop organized by club. At the time, Demmings was vice president and an Individualized Studies major. She graduated in December, but will return to campus to lead future educational events on deaf culture.

Last fall, the ASL Student Organization held a series of sign language workshops for faculty, staff and students. They included the “ASL Lunch and Learn” programs and the Nov. 28 book club meeting to discuss Russell Kane’s novel, “Fighting the Long Sorrow: A Journey to Personhood.”

The “ASL Lunch and Learn” gatherings took place over the lunch hour in Room 201 of the Student Center on the St. Paul campus. They provided a relaxed environment where people could bring their lunch, learn American Sign Language and gain insight to deaf culture.

During the workshops, Demmings demonstrated hand signs and distributed handouts for the ASL alphabet, numbers, and popular words and phrases. She modeled various facial expressions and body movements used in ASL communication. Julie Bauch, lead sign language interpreter for the Center for Accessibility Resources, assisted Demmings and the students.

Julie Maxson, an associate professor and director of the Center for Faculty Development, attended the Nov. 28 book event. She plans to use what she learned to advance faculty knowledge about accessibility issues and student needs.

Interest in ASL is growing on college campuses. According to the Modern Language Association, ASL is the third most studied foreign language at U.S. colleges and universities, after Spanish and French.

But ASL is not universal, and foreign countries typically have their own version of sign language, Demmings said.

“People think that is international and you can sign anywhere,” said Demmings. “I think it’s interesting—the different variations.” She noted that sign language can have regional dialects and accents. “There is slang in ASL too,” she said.

When discussing deaf culture, Demmings shared stories about challenges deaf individuals face in a hearing world. She recalled a girl at her residential school that spoke and lip read, but did not use sign language. The girl’s parents, as was true of many people at the time, wanted her to communicate by lip reading only. They did not give her the option to decide what was best for her. Demmings believes this may have lowered the girl’s self-esteem. “To have that as the only mode of communication is frustrating,” she said.

As a child, Demmings enjoyed being with her family but there were times when she felt lonely and left out. To connect with individuals like herself, she left her home in the Twin Cities to attend the Minnesota State Academy for the Deaf in Faribault. Although Demmings had many friends at the new school, she missed her family immensely. She wished there was more integration between the two parts of her life.

Years later, Demmings’ sister studied the ASL language and became an interpreter. At family reunions, the sister would interpret to involve Demmings with the conversations around her. She was thankful that her sister took it upon herself to learn a new language. Today, she feels blessed to have two children that are also signers.

Demmings likewise appreciates the new technology available to deaf people. She remembers the heavy, clunky telecommunication devices from the past. Demmings describes them as “green, terrible monsters.” She is appreciative of the video phones available on Metro State’s campus. “I love video phones. Now I can talk in my language,” said Demmings. She says the new equipment is a “wonderful equalizer.”

The ASL Student Organization will announce new activities for the spring semester soon. All events are free. To find more information about their organization and upcoming events, see orgsync.com/127375/chapter.