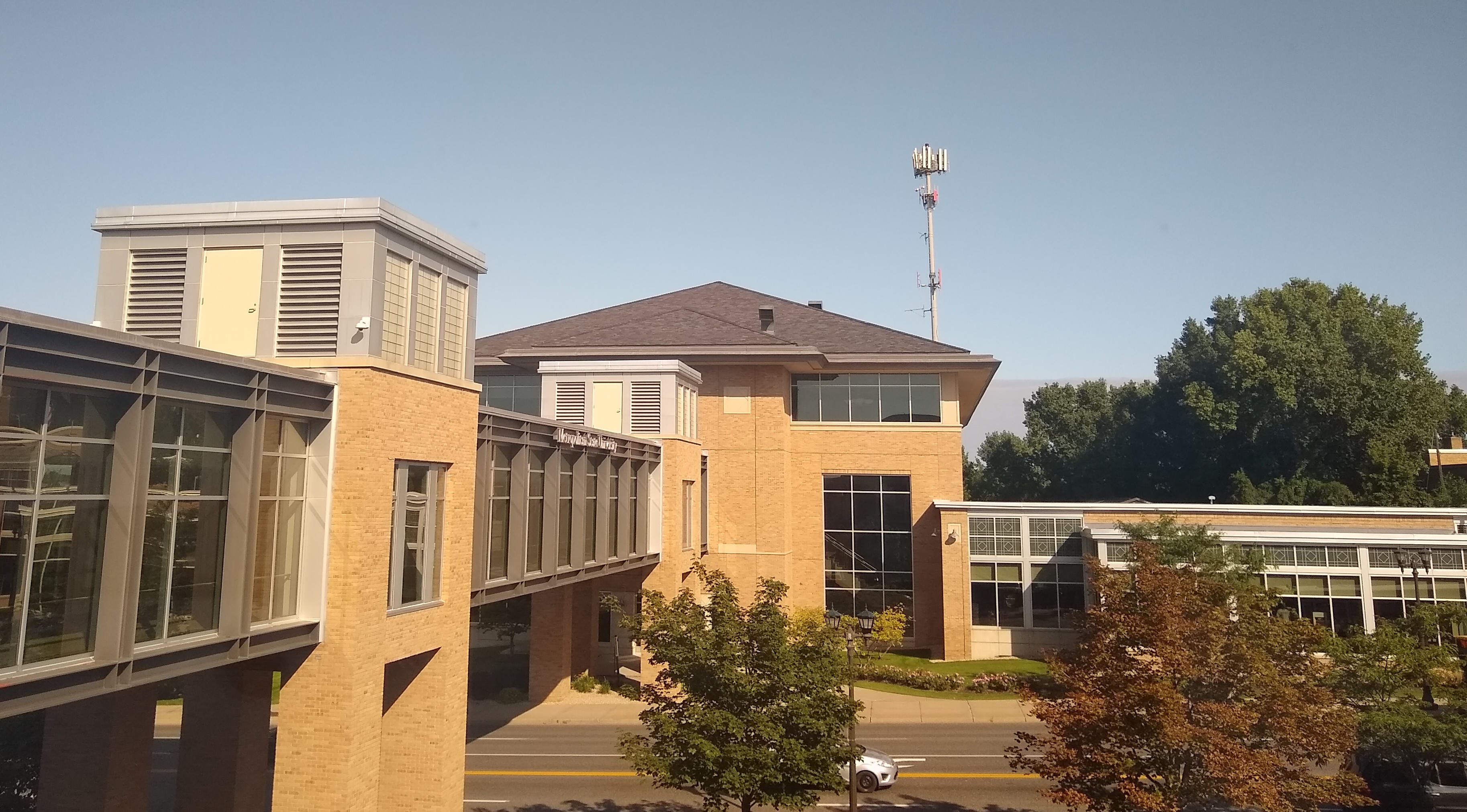 Metro State students and staff were alerted to three physical altercations that occurred on the St. Paul campus over the summer months. University and employee representatives reached out to students, faculty and staff in a variety of ways in response to these incidents. Additional conversations surrounding safety and security are being scheduled for fall semester, according to President Ginny Arthur.

“We are going to have a follow-up session where St. Paul PD will come in. We might wait until we get that assessment from [the G4S] security consultant, because then we can talk about that report and anything we learned there,” she said.

While this session is not officially on the calendar yet, President Arthur hopes to schedule it for the end of September.

Reviewing procedures and having conversations about safety are top priorities for many organizations following two deadly shootings in El Paso, Texas and Dayton, Ohio at the beginning of August.

Metro State is no exception. But safety reviews and conversations were underway on campus even before these national tragedies occurred. They were spurred by two overlapping factors: two major physical altercations occurring on campus grounds and security personnel changing at the beginning of July.

On June 19, a Metro State employee was assaulted on the northern steps outside of New Main. Students, faculty and staff were informed of the crime a couple of hours after it occurred via Minnesota State’s Star Alert System.

The initial message said that a “racially motivated assault” occurred when a man, later identified by St. Paul police as Steven Parker, approached the employee and asked, “What are you doing in my country?” before striking him across the face.

The employee was identified in an interview by KSTP as Shamimul Alam.

Alam helped police identify the assailant by picking him out of a photo lineup, according to Metro State’s Interim Safety, Security and Emergency Preparedness Coordinator Jason Fellows.

Fellows and other university officials were on hand during listening sessions in the days following the incident to address questions and concerns raised by staff and students.

Fellows indicated during one session that the assault was not captured by Metro State security cameras because many are motion-activated; this event occurred outside of their activation or coverage range.

On July 30, a little over a month after the first summer assault, a second one occurred on the first floor of the Library and Learning Center. Neither of the individuals involved in this altercation were affiliated with Metro State.  Fellows stated, however, that one student witnessed the event and later provided a statement to police.

According to the incident report, one party was verbally aggressive toward another who was exiting the restroom. A third individual—a known family member of the person who initiated the verbal confrontation—was also present but did not engage in the altercation.

Both individuals exchanged insults and started being physically aggressive; G4S security officers stationed in the library intervened and separated them. The party who initiated the verbal confrontation broke the barrier made by security officers and began to assault the other party on the back of the head.

According to Fellows, all of the occurrences up to this point were captured by security cameras. When this physical altercation occurred, however, their positions shifted and the remainder of the incident was not recorded.

As the parties engaged in “mutual combat,” a knife fell to the floor, according to the incident report. In a follow-up interview, Fellows said that security officers did not see which party originally possessed the weapon.

The party who emerged from the restroom picked up the knife and wielded it against the other party, drawing blood. At this point, security officers backed away and phoned 911. The person who was injured immediately left the scene, along with his family member.

The remaining party left the building a minute later, with security officers in pursuit. Officers kept that individual in sight until police arrived, according to Fellows.

St. Paul police issued a trespassing warning to the individual who wielded the knife, which bars him from entering Metro State buildings for one year, Fellows said. No other charges have been filed, and the other individuals involved have not yet been identified or located, despite being familiar faces around the library.

Fellows praised the training and professionalism of G4S officers as they dealt with the July 30 incident. 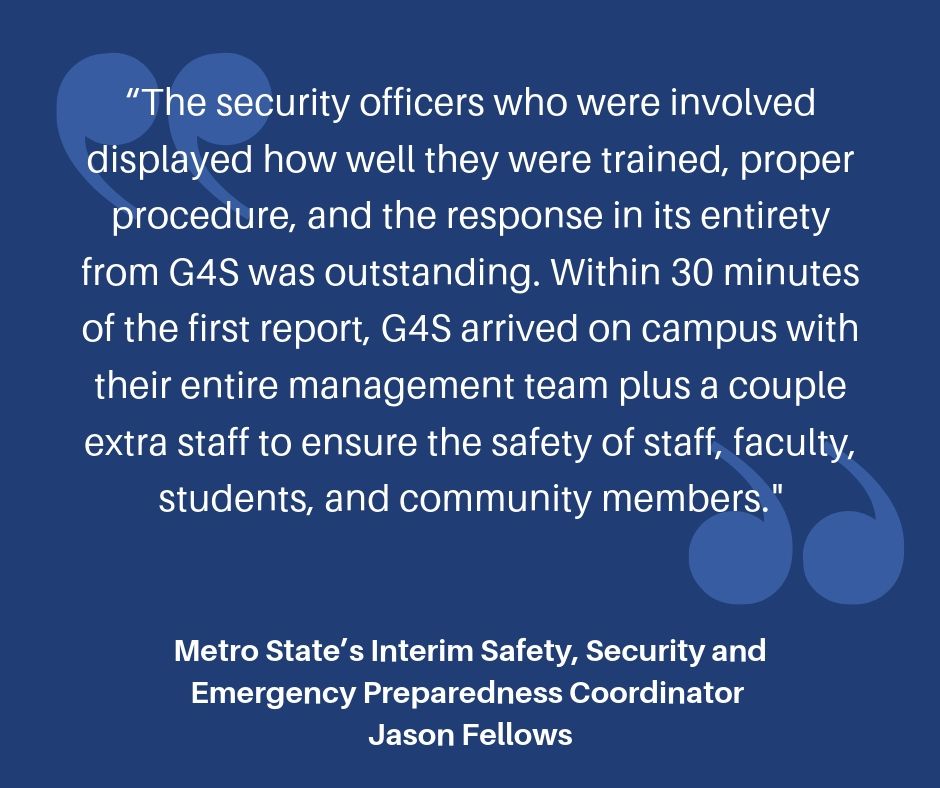 A third altercation where St. Paul police were summoned also occurred in the library, according to the Star Alert sent to students and staff on Aug. 7; however, university officials provided few details about this incident.

The Metropolitan requested interviews with security officers who were eyewitnesses. Email responses from G4S officials, however, implied that their officers are not permitted to speak with the media regarding campus security incidents.

The Metropolitan also requested incident reports from the assaults occurring on June 19 and Aug. 7 but did not receive them.

University officials reached out to Metro State members and the wider community in a variety of ways.

Hatch was the main university spokesperson after the June 19 assault. “[The executive cabinet] was meeting that morning, the media requests were coming in and president [Arthur] said, who’s going to be the media contact? I said I’ll do it. And she was like, great, that’s fine,” she said.

In addition to releasing statements to the media, university officials made efforts to keep the Metro State community updated.

On June 20, President Arthur sent out a follow-up email, which provided staff and students with contact information for support services. She also gave updates about the investigation that were available on the day following the assault.

On June 24, Interim Dean of Students Maya Sullivan sent an email to invite members of Metro State to three scheduled listening sessions: two on June 26 in the Student Center and one at the Midway campus on July 2. The purpose of the listening sessions was for students and staff to “engage and ask questions regarding the recent bias-related incident,” according to the message.

Sullivan’s email also included information about a “town hall for students and employees,” held on July 1 in the Founders Hall auditorium.

The town hall was coordinated by the Inter Faculty Organization (IFO), the bargaining unit for faculty at Minnesota State’s seven universities, and Metro State administration officials.

This event was well attended, according to Chief Diversity Officer Craig Morris. Approximately 60 people, mostly faculty and staff, went to the town hall meeting. By contrast, only one staff member and one student attended the Midway listening session. The ones scheduled in the Student Center did not fare much better.

According to Hatch, they were coordinated by different organizations and intended for different audiences. “[The town hall was] a conversation about any kind of impact to staff and faculty, psychological impact concerns that they had. How did they feel in terms of safety on campus, things like that. And I think the majority of that was led by the IFO, who really wanted to have a structured conversation that was actually led by a faculty member,” she said.

The listening sessions, by comparison, were meant to address student questions and concerns—yet students did not attend them. “It was unfortunate that more [students] didn’t show up [to the listening sessions], but at the same time, it wasn’t really all that shocking,” Hatch said.

Most Metro State attendees are balancing other roles besides being students. Many have family and work obligations in addition to being involved on campus. Further, fewer students register for classes during the summer months.

“It’s not that we want it to be like that, but it’s typical that we just don’t have a lot of folks that show up [for events and meetings],” Hatch added.

Yet there could be another explanation for the low turnout: not all students got the message.

The Metropolitan learned that some students did not receive Sullivan’s message about the listening sessions and updates to them.

On July 9, Vice President of Information Technology and Chief Information Officer Steve Reed indicated that all Metro State students who’ve been enrolled within three years should have received these universitywide messages.

When The Metropolitan presented evidence that not all students received these messages, however, he amended that statement—at least for the listening session communications.

“We discovered the [listening session] emails were only sent to students that were currently enrolled for summer.  … This was an inadvertent mistake made by the person who sent the message. We have addressed this mistake and have made the necessary changes to prevent this from happening in the future. All other emails that were sent were received by students that were registered last spring, current summer, and future fall semesters. All communication systems worked as designed,” he said in an Aug. 18 email.

Yet there were other gaps in communication, too. Some students did not receive Arthur’s message from June 20. Others did not receive an email sent by Hatch on July 5 that provided law enforcement updates regarding the June 19 assault.

These communication issues were not addressed in Reed’s email, and a follow-up request for comment or clarification has gone unanswered.

The Metropolitan wants to hear from you!

Tell us which emails DID NOT arrive to your school email here.

On Aug. 7, less than a week after the shootings in Ohio and Texas, Ned Rousmaniere, a representative from Minnesota Management and Budget and the Employee Assistance Program (EAP), facilitated another listening session addressing faculty and student worker concerns.

Provost Amy Gort invited students and staff to participate in the discussion via an email sent on Aug. 2. This email also indicated that EAP provided sessions in the library for personnel following the incident on July 30.

Security was also on the agenda during Convocation Day on Aug. 21. According to the schedule, Vice President Hatch lead a breakout session addressing “the evolution taking place in the areas of campus security and business services.”