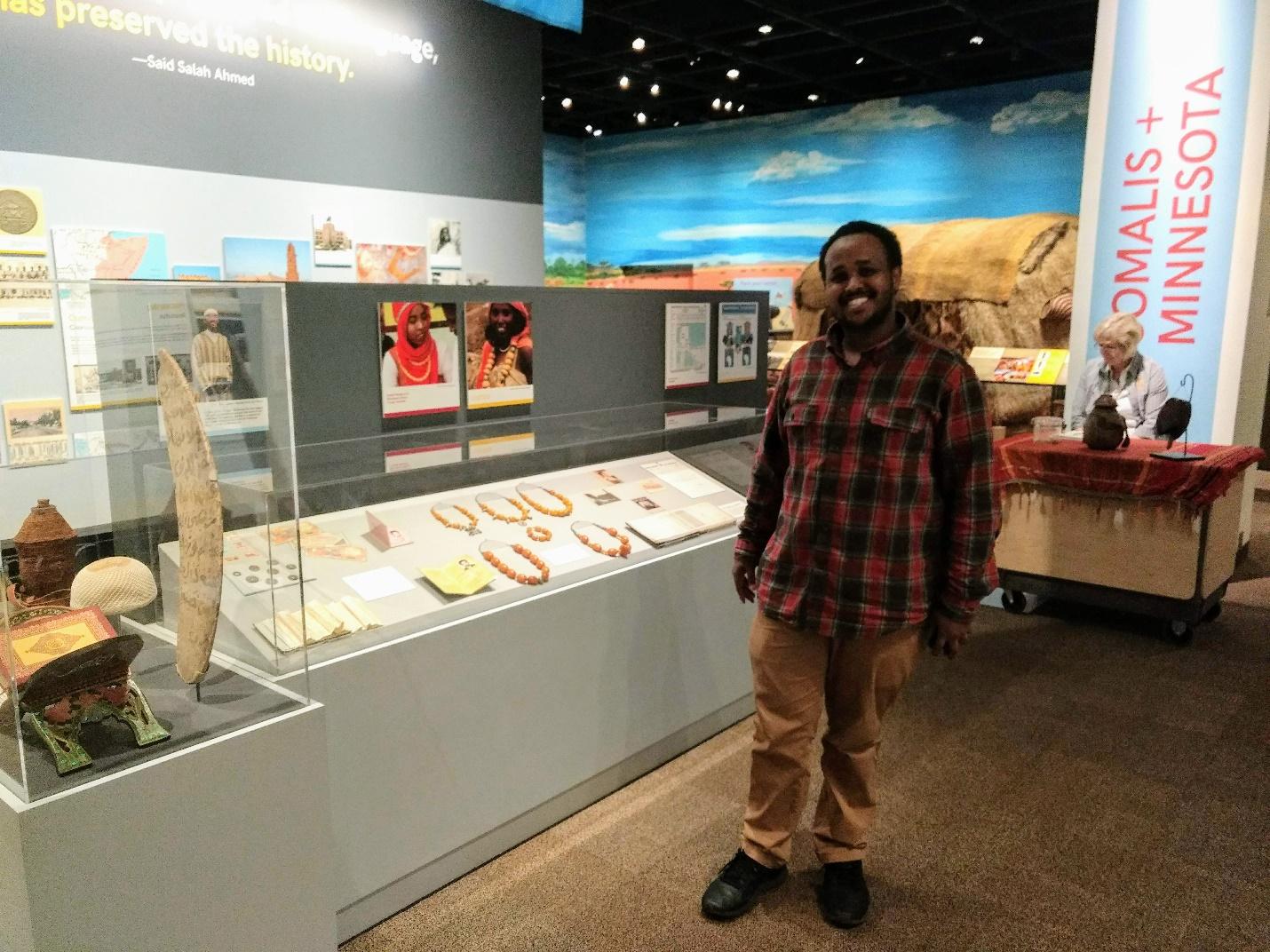 For Metro State student Luqman Mohamed, a return to the Minnesota History Center allowed him to share what he learned as an intern there last year. And for fellow members of the university’s Somali Student Association, the outing provided them with a new awareness of their ancestral homeland.

“The whole purpose [of the exhibit] is to bring awareness and a permanent home,” said Mohamed, public relations outreach coordinator for the student group.

The exhibit will leave the museum on June 9 after yearlong run. It will then move to the Somali Museum of Minnesota on East Lake Street in Minneapolis.

After Osman Ali gave a presentation at the Minnesota History Center in 2014, the idea arose of a collaborative exhibit between the museum Ali founded and the state historical society. As executive director of the Somali Museum of Minnesota, he wanted to connect younger generations of U.S.-born Somalis to Somalia’s culture, language, history and traditions.

To help the Minnesota Historical Society prepare for the exhibit’s opening, Mohamed served as a Somali community engagement intern for six months in 2018.

Using skills he developed by majoring in human resources, Mohamed recruited volunteers from area high schools and colleges. He supported the volunteers as they set up the exhibit and worked to keep everyone engaged in the project.

“[The volunteer experience was an] eye-opener for them. Most of them were born here,” he said. Mohamed was pleased that the project also connected him with his roots. It was a special moment for him when the exhibit was finally open to the public.

As the students viewed “Somalis + Minnesota,” Mohamed pointed out the significant aspects of the exhibit and clarified meanings.

In one instance, he showed an unusual photo of livestock with numbers on them. He explained that Somali herders write their phone numbers to help retrieve their lost animals. Sometimes people will call the number if they were interested in purchasing the animal, he added.

The exhibit was divided into three sections: Minnesota, history and traditional life.

In the Minnesota section, photographs of the state’s Somali community lined the walls. Videos depicted the experiences of immigrants who made Minnesota their new home after escaping Somali Civil War in the 1990s.

The history section of the exhibit discussed some of the more somber aspects Somalia’s history: civil war, drought and famine.

Happier times in Somalia were depicted too. The exhibit highlights Radio Mogadishu, a station established in 1943 to broadcast music, news, poems and plays. Photographer Abdulkadir Mohamed’s colorful, vibrant images show Mogadishu’s people celebrating and dancing on the beautiful beaches of the Somali Sea.

Visitors also got to see an example of a more permanent Somali dwelling, called a “mudal.”

In the background, there was an unusual noise. Following the sound of camel bellows and cries, students discovered an interactive exhibit about the pack animals, used in Somalia for transporting sugar, flour and rice.

“Quick fun fact,” said Mohamed once again. He pointed at the mural of a bright blue sky wrapping around the room. He said the mural was a computer-generated copy of an original work by Twin Cities visual artist Abdiaziz Osman.

Visitors could also examine artifacts from the Somali Museum of Minnesota and Osman Ali’s visits to Somalia. Among the loaned objects were fibers used for weaving, considered Somalia’s first industry.

Saynab Jama, president of the SSA, was impressed by the collection of items. Jama, who has never been to Africa, finally got to see a “loox,” a writing tablet for learning Quran verses. It was something her father described to her. Now she has seen it for herself.

“I am learning this for the first time,” she said. “Coming here and seeing this is amazing.”

The Somali Museum of Minnesota is the United States’ first and only museum devoted to Somali culture. The museum is located at 1516 East Lake Street, Minneapolis. For more information, see somalimuseum.org.

The Minnesota History Center is a museum and research library dedicated to Minnesota history. It is located at 345 West Kellogg Blvd., St. Paul, and on the web at mnhs.org.