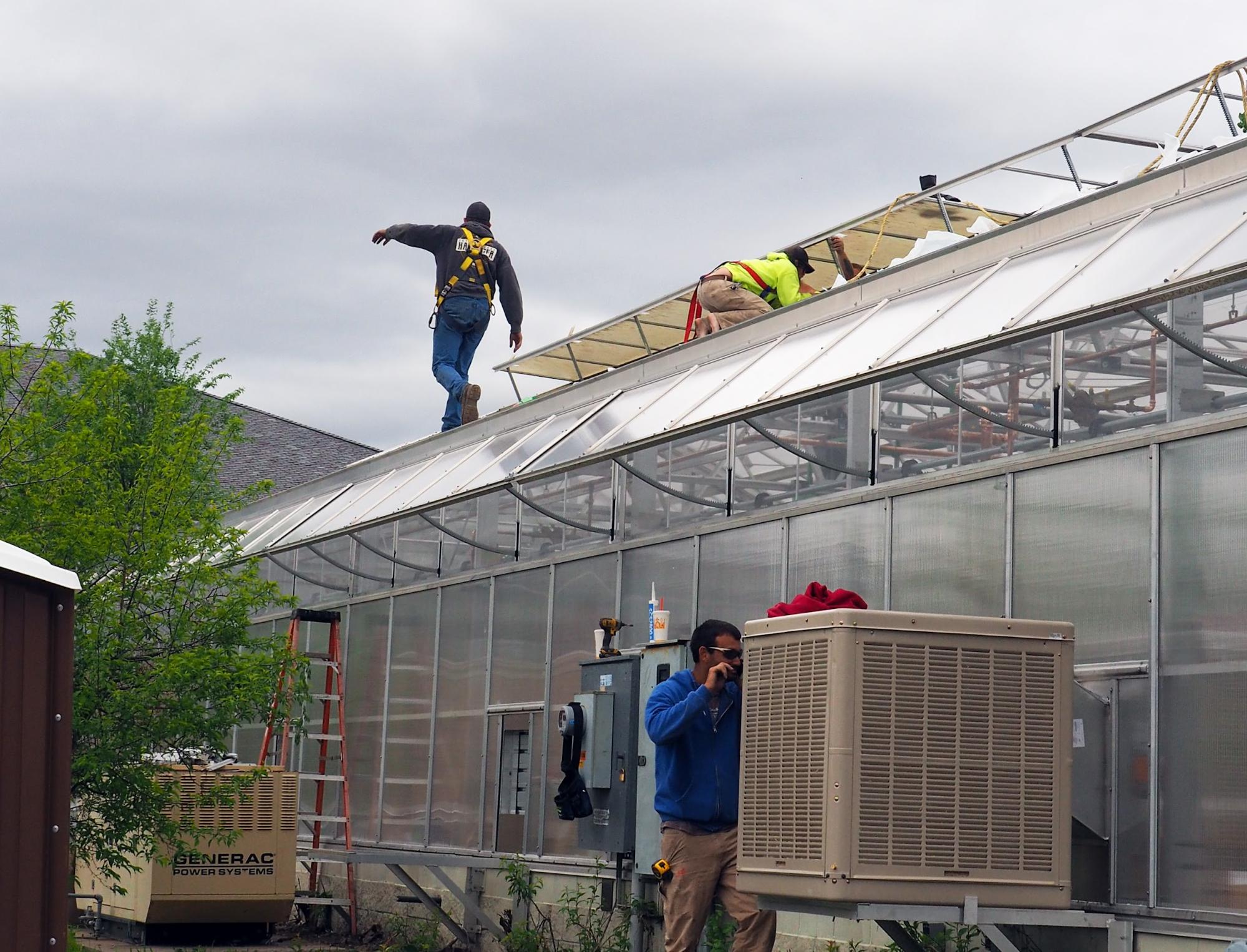 Despite a major financial setback late last year, the greenhouse portion of Metro State’s new GROW-IT Center will be ready for students by fall 2019.

The center is located at 445 Maria Ave., next to the Art Studio and Library on the St. Paul campus. Its name is an acronym: Gateway for Research, Outreach, Workforce Development, Innovation and Teaching.

Psychology 580, a community change practicum taught by psychology professor August Hoffman, is slated to use the space this fall. “I plan to use approximately one-half of class time for my students to work within the GROW-IT Center,” he said in an email.

His practicum students will propagate seeds and starter plants that will be moved to a garden and orchard at Inver Hills Community College next spring and summer. The garden, which Hoffman co-founded, is shared between Metro State and Inver Hills.

Urban Roots, a founding partner of the GROW-IT Center, will also move into the new space once renovations are completed in July. The nonprofit, established in 1969, offers paid summer internships for East Side neighborhood teens to develop skills in farm-to-table food production and conservation.

Other primary partners include Metro State’s College of Sciences and Department of Psychology, Friends of Swede Hollow and First Lutheran Church.

Jodi Bantley, community engagement coordinator for Metro State’s Institute for Community Engagement and Scholarship, has been working with these partners since the beginning. She led the task force that developed the project’s scope and vision back in 2014.

The center was scheduled to be finished and fully in use by now. Instead, major renovations just got underway on May 13, according to Eric Clark of Rough Brothers Inc., a greenhouse construction firm working on the project.

Why the delay? Bantley identified one major problem: money.

When the final design was completed in spring 2018, the project was almost completely funded. Organizers were confident that GROW-IT was on track for completion by spring 2019.

In fall 2018, it was time to solicit bids and hire contractors to begin construction.

But then the actual bids came back. The total estimated costs, generated from the final design specifications, proved wildly inaccurate.

“The construction portion [of estimated costs] was about $650,000,” Bantley said. “The bids came back at twice that.”

The new construction costs alone were well above the estimated budget for the entire project. So why the huge price increase?

“The explanation was that the construction market was super, super hot,” Bantley said. “There was considerable fear on the part of contractors about the impact of tariff wars on the cost of their materials.”

"These are issues of global trade that no one locally has any control over whatsoever,"

Bantley said. “So [this surprise cost increase] was very dispiriting to the planning group. We fully expected to bid the project, engage a contractor and be open for business in spring of 2019.”

To make matters worse, the price of concrete—a major component of the greenhouse addition—also ballooned during this period.

Given these new realities, the planning group had no choice but to reject all of the bids, go back to the drafting table and develop another design.

“You can do your best to plan and create together, but in the end, reality governs,”

Bantley said. “So we are where we are.”

“Building standards that govern Minnesota State are more rigorous than typical commercial building standards,” Bantley explained. “Most campus buildings are designed to last 150 years. The thinking is that these are taxpayer dollars, and if we are going to build these big buildings, we should build them so that they last a long time.”

One of those building standards is related to concrete—a contributing factor to climbing construction costs.

In order to maximize structural durability, Minnesota State buildings typically use concrete that is poured into frames, instead of concrete blocks. Planners were able to get an exemption to this and other building requirements in order to save money.

The planning group also trimmed expenses by changing the look of the building addition. The roof is now going to be flat instead of pitched. Additionally, the front of the building will not be fully glass as originally designed. It will feature a large wraparound window instead.

The last decision made by the planning team was to stagger the project into two separate phases, so that the greenhouse renovation could begin while partners continue to raise money for the addition, Bantley explained.

The phase one renovation of the greenhouse is now underway. Clark listed many improvements that Rough Brothers has made to the structure.

Old, yellowed polycarbonate panels around the greenhouse have been replaced with acrylic ones. A new shade system is being installed for temperature and light exposure control. New cooling cells—essentially industrial-sized exterior A/C units—have been installed. The restroom inside the structure is getting refurbished.

Plumbing and electrical contractors will begin their work in June 2019. Rough Brothers will add finishing touches, such as doors and benches, afterwards.

According to Bantley, phase one should be completely finished and ready to use by July.

As for phase two? The addition to the greenhouse has not yet been put out for contractor bids.

“After we bid phase one, even with the modifications, the bids came back 40 percent higher than estimated,” Bantley explained. “So the university made a decision that in order to move forward with phase two, we would also need to increase that bid [estimate] by 40 percent.”

Through a variety of funding sources, including a $400,000 appropriation from the Minnesota Legislature through the Department of Agriculture, the project had already secured over $1.2 million.

But in order to proceed with phase two building, planners need to raise $450,000 more.

Although new total price estimates—currently around $1.7 million—are daunting, Bantley remains optimistic. Her goal is to bridge the funding gap as soon as possible.

“We’re continuing to reach out to corporations and foundations, and we’re beginning to talk to individual donors,” she said. “We think there are a lot of people out there, a lot individual philanthropists, who share our interest in healthy food access and urban food access and environmental sustainability.”

Project leaders have also applied for a STAR (Sales Tax And Revitalization) grant from the city of St. Paul.

“About 20 years ago, the Minnesota Legislature approved the city of St. Paul’s request to add a quarter-cent sales tax. And the funds created by that quarter of a cent sales tax is then used for economic development projects,” Bantley explained. “We’re hopeful about [receiving that money], but it’s also a very competitive pool.”

“We’re holding fast to our big picture vision and I remain confident that we’re going to get phase two done, hopefully within a year or so,” she said.

Once phase one is complete, there will be a lot of activities going on in the GROW-IT Center. Metro State departments will have to share the space with each other and community partners.

Kyle Swanson, dean of the College of Sciences, is in the process of hiring a manager for the GROW-IT Center. In an email, Swanson said the part-time staff person will work with faculty to schedule classes and labs. The manager will also monitor growing conditions, plant diseases and pests.

As a liaison between the university and community partners like Urban Roots, the manager may offer tours, demonstrations, community education or job-training activities.

Swanson indicated that the GROW-IT manager position will be posted shortly, according to state-mandated hiring practices. The target hiring date will coincide with the start of fall semester.

But it matters. It matters not only to this immediate community and to our students and to our faculty and our student affairs professionals, but it matters because it is teaching all of us, in the process, how to build truly reciprocal community partnerships. And it’s messy. That’s messy work. And also incredibly valuable work,” Bantley added.

Now that phase one has broken ground, the campus community can see the first shoots of progress emerging at the GROW-IT Center.