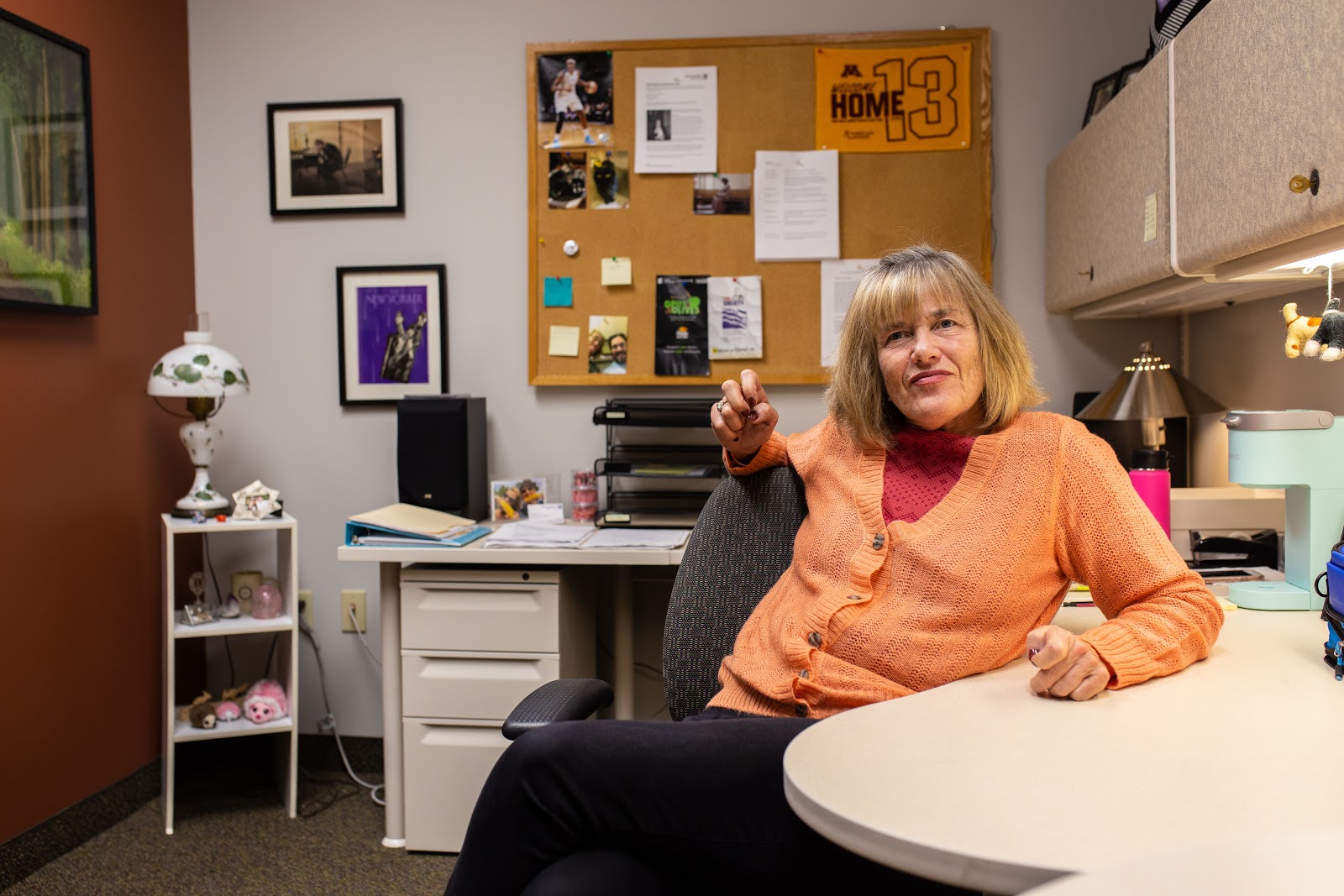 Tara Guy was a guest writer for The Metropolitan.

When Metro State students sign up for one of Professor Suzanne Nielsen’s creative writing courses, they get more than remote, scholarly advice on point of view, internal monologue and plot.

Nielsen encourages her students to develop their own point of view, listen to their own internal monologue and often, to begin to craft the plot of their own life. Especially if they’re dreaming of the writing life.

A published writer herself, Nielsen brings vast and varied life experience to her classroom.

Her story is perhaps not a traditional narrative arc: early life with a dysfunctional family of origin, a troubled adoptive family, alcohol addiction as a young woman, years of counseling patients in a psychiatric hospital, and an ex-husband who advised her that she was too stupid to succeed in college.

At age 62, Nielsen was recently appointed as resident faculty—what she calls her “dream job.” Formerly she served as community faculty in creative writing at Metro State and a tutor in the Center for Academic Excellence.

The accomplished academic, who holds a doctorate in education from Hamline University, was reflective during a recent conversation at her comfortable office near the Midway campus.

She was raised on St. Paul’s rough-and-tumble East Side and graduated from Johnson High School in 1974. That background left her with a deep fondness for the kind of blue-collar, working class people she grew up with.

“It’s one of the things I love best about Metro,” said Nielsen, who began teaching at the university in 1999. “The great diversity, people working hard, going to school, making a better life for themselves, their families.”

Nielsen ruefully recalled living on ramen noodles in the 90s as a single mom with two little boys, newly enrolled in college at age 37.

“I love Metro State students because I WAS one!  I totally understand the challenges,” she said.

After high school Nielsen found herself drifting into a serious struggle with alcoholism, which she conquered in treatment and recovery. In so doing she found her first calling, embarking upon what would turn out to be a 15-year career providing chemical dependency counseling in the locked ward of a psychiatric hospital.

“I saw a lot of sadness in that place,” she said. “People will tell you their pain, if you listen. Some just get tired. Some just want to be heard and understood.”

Quietly, she added: “Some just want to let go.”

Nielsen left her counseling work a few months after one of her patients died by suicide on her watch. That traumatic experience seems to have served as a watershed moment in the development of her writing and teaching ethos.

Colleagues and students take note of Nielsen’s empathy on the page and in the classroom.

Point in case? When Nielsen gives students a writing assignment, she undertakes the same task herself.

“I allow myself exactly the same amount of time, so I can feel their deadline looming,” she said with a chuckle.  “It keeps me fresh, and in tune with them.”

“I first met Suzanne in my junior year and immediately appreciated her humor and down-to-earth approach,” said Brandon Hall, a recent creative writing graduate. “She was one of the most supportive professors I have ever encountered.”

Nielsen is funny—but she takes her students’ writing seriously and insists that they do too.

“Suzanne was a great mentor,” said Sarah Fjellanger, another recent graduate. “[She’s] a person who, in the gentlest of ways, pushed us to do what we thought we couldn’t.”

And inspired by “glorious” student writing last fall, she submitted a number of her own pieces to publishers. A new Nielsen poem appears in the 2018 “Mizmor Anthology,” and she has eight works soon to be published.

She was a student in Professor Brian Nerney’s first-year writing class many years ago.

“I assigned a six-page personal essay and Suzanne turned in a splendid 12-page essay,” said Nerney. “Her enthusiasm leapt off the page.”

“Her new appointment [as resident faculty] celebrates her extraordinary development as a writer and a teacher of writing,” he said.

Professor Emerita Alison McGhee, founder of the Metro State’s creative writing program and an early mentor of Nielsen’s, characterizes her as a “superhero.”

“Suzanne has gone through incredible hardship in her life, and that beautiful heart of hers has only grown more enormous over the years,” McGhee said. “Her love for and devotion to every one of her students is unparalleled.”

“Watching Suzanne nurture the spark of creativity in her students, and by extension nurture their hearts and souls, is one of the great joys of my own life,” she added.

When McGhee retired in 2017, a hiring committee set out to find a candidate with a similar creative tool kit. Nielsen won the role.

“It was hard for me to leave Metro, a place I love so deeply,” McGhee said. “But it was immeasurably easier knowing that Suzanne would be taking my place.”

Tradition holds; the tenor of the creative writing program resonates in Nielsen. She will also return to the role of faculty advisor to Haute Dish, the university’s arts and literary magazine created years ago by McGhee.

In the end, one thing is clear:  Professor Suzanne Nielsen is beloved at Metropolitan State University—and it’s a mutual admiration society.

“I’m 62, and I have no plans to retire,” Nielsen said. “I’m going to keep going until this old ticker quits!”

She laughed. She gestured to her heart. “This place and these people are my joy.”