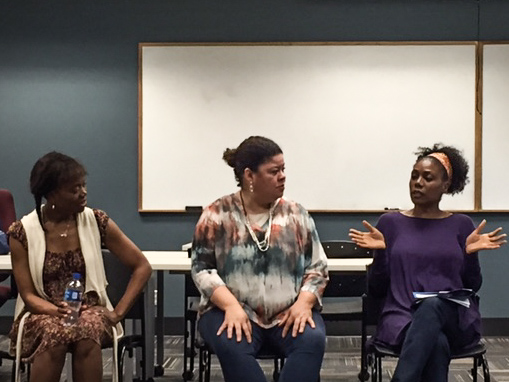 Billie Holiday was before us.

The actress playing the legendary jazz singer had slipped seamlessly into the role. One moment Twin Cities chanteuse Thomasina Petrus was seated in front of an ordinary Metro State classroom. The next she was on her feet, commanding the stage, capturing the richness and rhythm of Holiday’s voice.

“I’m the new Billie now,” the actress said. “I should be called Lady Yesterday… Old Billie’s a crock.”

Petrus was “on stage” in the creative writing class of Professor Ed Bok Lee on the Midway campus on a June afternoon. She was there to offer a snapshot of “Lady Day at Emerson’s Bar & Grill,” her one-woman show playing May 26 to June 24 at the Jungle Theater in Minneapolis.

She was joined by Regina Williams and Austene Van, fellow cast members of the Penumbra Theatre in St. Paul. They share a mission to put on plays illuminating the African-American experience—and actively work for social justice.

“If we didn’t have Penumbra, none of us would be here,” Williams said. “Thank goodness we have a place bold enough.”

Lee’s class—WRIT 300: Creative Writers, Identity and Race in the Twin Cities—had studied the life of Holiday, considered among the finest musicians in American history. One student said he had heard the name but didn’t know Holiday was a woman until the class.

As an African-American woman, Holiday confronted racism and persecution throughout her career.

Petrus, Williams and Van described the many ways Holiday pushed back against a white supremacist society: breaking color barriers in performance venues, playing with an all-white band, singing protest songs like “Strange Fruit.”

“It was a dangerous time to be black and a woman,” Petrus said of Holiday’s heyday from the 1930s to 1950s. “To be denied access to a restroom, to be dehumanized like that is something a lot of people can’t wrap their heads around.”

Lee welcomed the theater program to his class to illustrate that all artists “start as students themselves.” He noted that the three theater professionals had pursued work not only in acting but singing, dancing, directing, producing, and interpreting.

“For students, many not from the liberal arts, it’s so important that they get exposed to the performing arts in a real, palpable way,” Lee said. “Passion is contagious.”

The Twin Cities art community is hoping that passion will spur students into theater seats.

Minnesota arts advocacy organization Springboard for the Arts asked Lucas Erickson, a graduate student at the University of Minnesota, to study how local theater companies can build newer, younger audiences. He said theater audiences are aging and declining in Minnesota. So why not try bringing actors directly to college students?

Petrus told students about seeing and falling for “Lady Day at Emerson’s Bar & Grill” when she was 15 years old. She later produced it as a solo show, and has returned to the role and Holiday’s repertoire many times.

“There was just something about Billie that pulled me into jazz,” she said.

And perhaps there was something about Petrus’s voice that pulled students into the history and drama of Holiday’s life, and sparked a wide-ranging Q&A with the three theater professionals.

Before heading to the next classroom visit at Normandale Community College, Petrus broke into song once again. The lyrics of Holiday’s “God Bless the Child” resonated in students’ ears: “Them that’s got shall have/Them that’s not shall lose/So the Bible said and it still is news.”