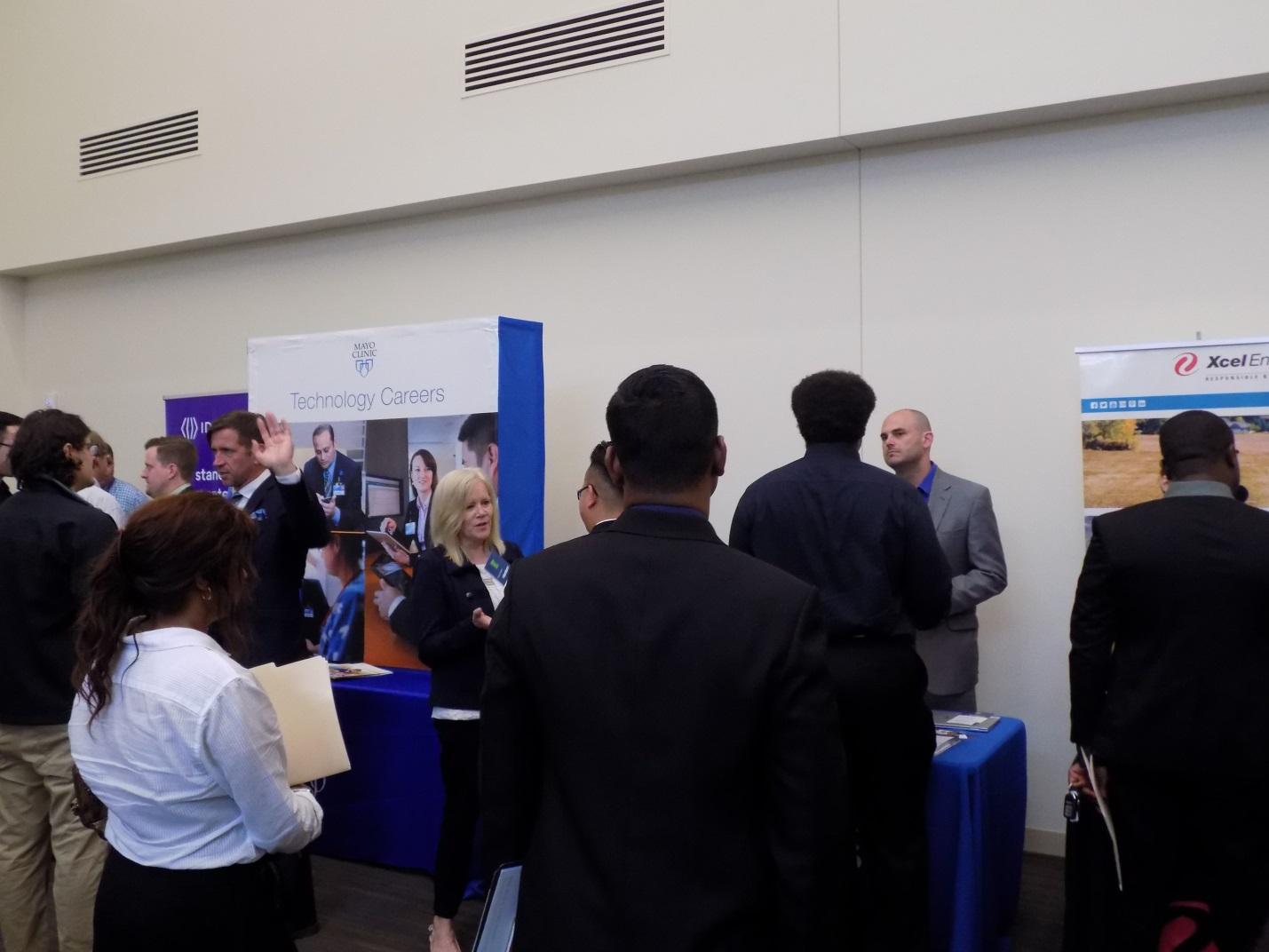 For Aleta Ruffin and Bethany Schwerr, attending a cyber career expo at Metro State on June 27 was an important exercise in what they called a very intense boot camp— the MN Cyber Academy.

An initiative of Metro State and the Minnesota State IT Center of Excellence, the MN Cyber Academy trains IT and cybersecurity professionals from the beginner to advanced level.

An estimated 120 people meet tech job representatives and recruiters at the expo at the Student Center on the St. Paul campus. The expo was co-hosted by the Metro State Career Center and the MN Cyber Academy.

Ruffin, who holds a bachelor’s degree in computer forensics, is not currently seeking employment but attended the expo to support her classmates. She appreciated the variety of technical recruiters present.

Dr. Faisal Kaleem, associate professor in information and computer sciences and executive director of MN Cyber, required his students to attend the expo. “It’s important for networking,” he said.

Bethany Schwerr, a computer forensics and cybersecurity student, said she liked that the event was a targeted career fair and that employers were looking for students with knowledge of “what they are teaching us in the academy.”

“I don’t [necessarily] have to work for a technology company,” said Schwerr. The expo showed her a broad range of institutions, such as retail and health care, which are implementing cybersecurity to protect customer information.

And Schwerr sees that the need for cybersecurity professionals is growing.

With the increase in digital records and new technologies such as apps, Schwerr said that more companies are asking how they should protect consumer information. With increasing threats and trepidation over stolen data, companies are moving from a reactive approach to a proactive one.

In Schwerr’s opinion, computer security was “more of a niche” field in the past. “Now it’s more of a concern,” she said. “Employers are learning about the importance of cybersecurity.”

With the increase of cyberthreats, job openings in cybersecurity have also increased. Many firms filled the first floor of the Student Center to recruit job candidates and students.

One of the recruiters at the expo was Diversant, a New Jersey-based IT staffing agency. It is the largest African American-owned IT staffing firm in the U.S.

Eddie Byrd, a technical recruiter, said there are many IT positions open in fields such as retail, banking and finance—but not enough talent to fill them.

His aim at the expo? “To find someone qualified,” Byrd said. “Move quick.”

Idemia, an innovator in identity technologies like mobile driver’s licenses, was also on the lookout for more talent.

Jon Jackson, a director for Idemia, appreciated the knowledge and experience diversity of Metro State students. He said he met with cybersecurity students who also had backgrounds from other IT fields. One student had a traditional IT background but came back to school for computer security. Another student had an MIS degree but decided to move into computer security.

“It’s a nice combination of perspectives,” said Jackson.  He appreciated the MN Cyber Academy’s “unique” approach to diverse perspectives and hoped it continued.

‘Let us be amazing’: Workshop series helps students step up as leaders