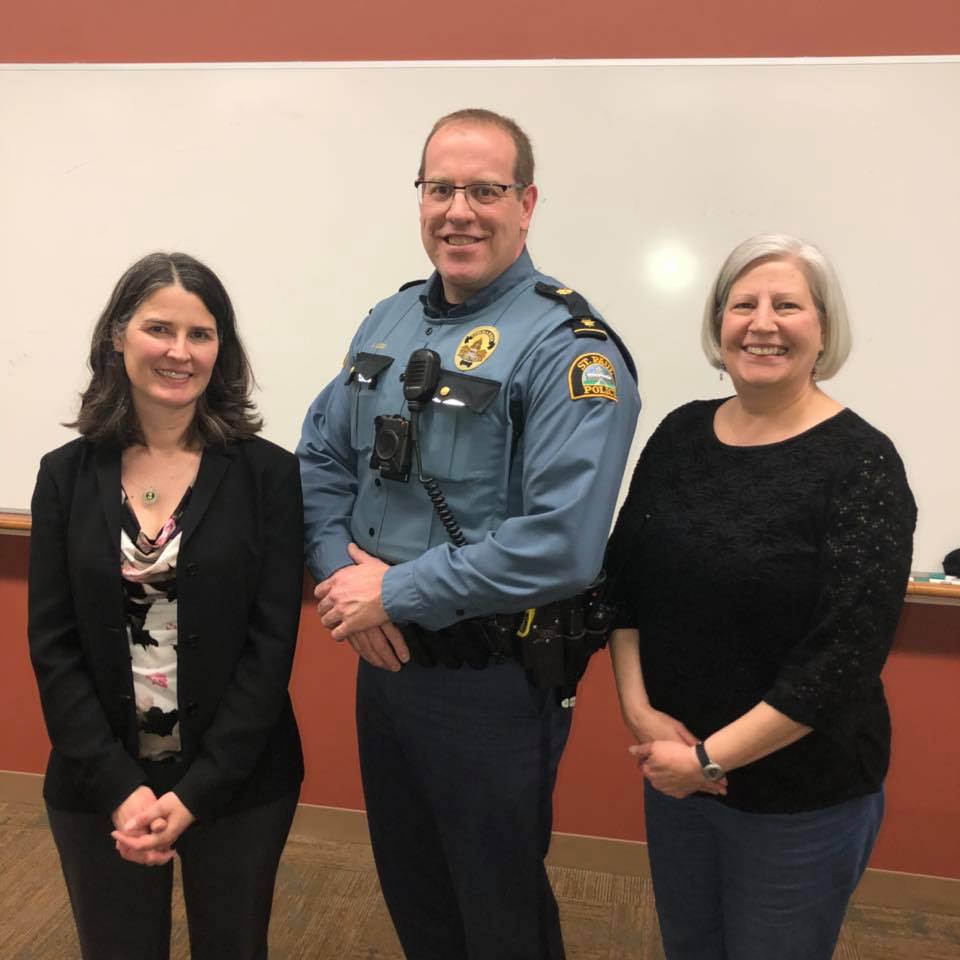 Freedom of assembly was the topic of conversation between a Metro State professor and a St. Paul police officer at a campus forum on April 19.

The forum on “Peaceful Protest and Social Movement Organizing” was sponsored by the Department of Social Science and the League of Women Voters of St. Paul.

“Like a professor would, I brought readings,” said Cole. She opened the forum by distributing an article about civil resistance to the dozen people gathered in a Science Education Center lecture hall.

Cole said disruptive protests are the “tools of outsiders”—those who have been excluded from the traditional power structure. Outsiders are unlikely to use conventional methods of political influence like lobbying, she said.

Why do people engage in nonviolent protest? Because it works, Cole said. “As a social scientist, I know it to be more effective.”

She cited the example of the Black Lives Matter protests over the fatal shooting of Jamar Clark by Minneapolis police in November 2015. Protesters camped outside the Minneapolis Fourth Precinct police station for 18 days. Governor Mark Dayton met with Clark’s family and protest organizers within days of the encampment’s start.

“They never would’ve been in the Governor’s office without being disruptive,” said Cole. “They had to be disruptive to cause the tension.”

Nonviolent actions reduce the risk to protesters, and therefore draw more participants to a social movement, the professor said. Violent protests are less effective because the state is better equipped to use force, and they allow the state to “delegitimize claims” of the social movement, Cole said.

“I couldn’t disagree with anything [Cole] said,” said Commander Lego.

Lego spoke about how the St. Paul Police Department has responded to recent high-profile protests and marches in the city, including March for Our Lives, the Women’s March and protests over the fatal shooting of Philando Castile by a St. Anthony police officer.

He said his department has come a long way in the past five years and aspires to a “St. Paul way.”

That means the department aims not to get in the way of people exercising their constitutional rights, he said. Just as they would move traffic around the scene of a car crash, Lego said officers direct traffic away from protesters.

Lego said he appreciates opportunities to talk and negotiate with protest organizers. Before the Super Bowl in January 2018, protesters assembled in downtown St. Paul. Lego said he understood that “the group wanted to be visible and heard.” So police suggested a safe route for them near the Xcel Energy Center.

“It was a huge win from our perspective,” Lego said. “No cars encroached and their goals were achieved.”

Cole pushed back on the idea that all protesters can or will coordinate with police. “If your grievance is police actions, then are you going to say, ‘Let’s coordinate’?” she asked.

Lego acknowledged the difficulty of policing protests of police. “We are the issue,” he said. “It is a tough position. But we can only control one thing—our response.”

Cole and Lego agreed on strategies for protesting safely.

They advised using a buddy system when attending a protest, and having an exit strategy. Do not wear contact lenses or skin moisturizer as pepper spray is attracted to it, Cole said.

Police will announce loudly and clearly if a protest has been deemed an unlawful assembly, they said. So know that if you stay, you will be arrested.

Lego also recommended that protesters keep an identification card on them. Unlawful assembly is a misdemeanor for which people are ticketed and released. But if police cannot identify someone, they take him or her to jail for fingerprinting.

Cole said participants should look for hallmarks of an organized protest, including people serving as marshals, medics and legal observers.

After the program concluded, Cole said she was glad the League of Women Voters proposed the topic and brought it to a college campus. She wants to challenge students to consider the political and community impacts of living in “hypersegmented and polarized society,” she said.

“People are so uncomfortable with disruption, especially in the land of ‘Minnesota Nice,’” she said.  “So let’s talk about that.”